Is OGS a good manager? Possibly but an ape could have come into a dressing room full of highly expensive players and done better than the Portuguese.

2. Injury crisis. Much is made of the loss of their forwards yet at PSG they had England’s wonder boy and the most expensive CF in the league. In defence, MU have their first choice Back 5 (almost :-D)

Nutty on the ground, as usual

3. The PSG victory is amongst the finest in CL history. Poppycock. MU were totally outclassed throughout the game. It was a travesty of justice, I cannot remember a luckier win. What may not be a myth is that MU have been blessed with the lucky stick.

4. MU are playing fine football. More cobblers. A midfield that focusses upon  kicking it’s opponents, a very muscular and physical backline does not make for entertainment.  The new boy, Tom Mac-something is a re-incarnation of that deeply unpleasant Irishman who battled our Leader, Sir Patrick. Keane was a vision thug and so id this chap.

5. Referees. It was never a penalty in Paris. Once again a referee chose to favour MU – it wasn’t the first time and will not be the last. Throughout their history they have consistently been given dubious decisions (who can forget the Rooney dive?). The chap who gave the pen on Weds is driving home in his new Ferrari. Today we have the dreadful Jon Moss, a man who has consistently been anti-Arsenal biased. Expect Xhaka to see Red.

What is not a myth is that United have the world’s best goalkeeper, De Gea is almost as good as Schmeichel. Fantastic player who wins MU at least 10 points a season.

If confidence wins games, and it often does, we are in for a heavy defeat. We were awful midweek but could and should have won at Spurs; hopefully the Spurs performance will be uppermost in our chap’s minds.

We have a lengthening injury list added to the ban on Terreira, so the team almost picks itself. I would certainly start with Ramsey. Do you think Elneny will get a few minutes – he wasn’t even taken to Rennes!

I wrote pre-Spurs that many were hoping for 2 points from the Spurs/MU games. I wanted 6, and we should be half way there. We are not but we can make it 4. MU are not invincible, they are a bunch of expensively collected mercenaries who are on a run of scarcely credible good fortune – it cannot continue.

If football is meant to entertain, lift the spirits and make us happy then watching Arsenal beat PSG in Singapore on a Serbian stream while sitting on my sofa in London ticked all of those boxes.

It was good fun wasn’t it? Something new is happening, it may not be the much talked about high press, well not yet anyway, but there is something. Maybe there is a new found determination, maybe there is a new found freedom I can’t quite put my finger on it yet. It’s like Unai Emery has added oil to where oil was lacking and the whole thing seems to be flowing much smoother.

The format followed that of Atletico: there were three parts to it. In the first 60 minutes UE played a sort of serious team, this gave way to half a dozen changes for what seemed like giving certain players game time and then the third part in which the remaining academy players got a run out.

There is no doubt that up front we have an abundance of riches — and we have Iwobi. Özil was playing with a smile on his face as wide as the Bosphorus; that would be the same Özil that was playing with the body language of a dead frog only a month ago. (That description makes me howl) His goal was superbly taken.

Taken that is from a beautifully weighted pass from Aubameyang who was (if I am not mistaken) playing out on the right this time. Mkhitaryan looked as classy as ever and all this without Lacazzette who not only turned up in the second half looking as fit as a butchers dog he had sharpened his shooting boots as well. Two really good goals, the first being the peach of the pair which I had to watch at least five times to see just how he had made Buffon look — well silly.

Guendouzi was the standout, I am afraid to say it but I think he has made Elneny redundant already. Xhaka with a Side Show Bob hair do? The young Frenchman seemed to be everywhere and he is never going to be accused of not wanting the ball. There was a touch of show boating in the Atletico game which had vanished this time againsd PSG after what must have been a stern word in the ear. 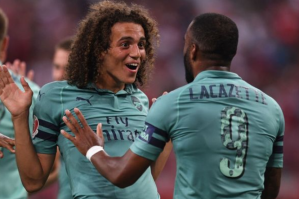 Hector looked sharp; in fact the whole squad looked hot damn fit and ready to go. Kolasinac was left wanting for pace when conceding a penalty; he is surely only filling in for Monreal who himself is just filling in for what must almost certainly be the next heavy weight signing. No offence Nacho, love you to bits, it’s an age thing but fear not there is will be a role for you for quite some time just look at Lichtsteiner.

Goalkeeper looked ok; he made one clearance that we nearly scored from which I was impressed with. Good to see Eddie get on the score sheet again.

Yeah, all in all a fun day’s viewing and looking forward to the Chelsea game.

This may be the most interesting and glamorous game so far this season, with both teams guaranteed entry to the next round attacking football is assured.

PSG are a fantastic team; full of wonderful top quality players, Parisian (which is a very good thing),  a huge following, a fine stadium, playing attacking, intricate, intelligent football. Everything that I love about Arsenal (apart from tradition and geography) is true of PSG. That said, my Gallic friends consider PSG the Chelsea of French football, having come from nowhere and being bankrolled by foreign money

Beat them and we win the group, draw and we  (can) win the group. We have to be favourites despite being outplayed in the away fixture with Ospina winning MotM. Had Cavani played to his normal standard we would have been hammered, but he didn’t and we weren’t.

How marvellous is it that Aurier has been refused entry to UK? Perhaps they can do the same for Messi, Suarez and Neymar when they next come to Arsenal:-D

Thanks to the quality of our squad we have question marks over the team selection. The media focus is upon who plays CF and whether Ramsey will start. Some Gooners will be hoping for Xhaka to start ahead of Elneny especially after our lacklustre display at the weekend. Given Theo has a “tweak” will Ox start on the right? Will Iwobi return?

I am hoping that Xhaka will try some long distance shots as this is something we have been lacking in recent weeks. Sanchez needs a rest and will be on the bench as supersub, as will Ramsey and Ox. 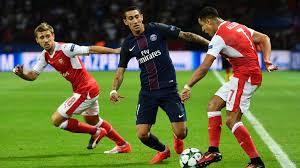 If we draw the our performance in Basle becomes more significant, if we win or lose, it doesn’t.  Unlike many I give little credence to the importance of finishing first or second, all the teams in the final 16 are very good.

Off subject, a little, what was going on with Spurs last night? To spend hundreds of millions to achieve the ambition of reaching the CL, why play a weakened team in a vital match? Bizarre but typically Spurs. Perhaps they will go far in the Europa 😀

It will be a cloudy, windy night with some showers, a win will see us Walking in Sunshine .

Who is Arsenal’s Top Scorer in the Champions League?

Lovely warm Autumn night, great stadium, very good opponents, a night to look forward to. Win or draw (I never mention a loss) I will enjoy our return to the Champions League, our 19th season in succession.

Can we get further than the last 16? We haven’t since 2010; if Arsenal are to be taken seriously as a top team then we must reach at least the quarter-final. Can we? Much will depend upon tonight’s result because if we leave Paris with at least a point we are in the box-seat to win the group.

PSG are in poor form (for them) and having lost both Luiz and the Big-Nosed Swede during the summer (how could my favourite player sign for those Northern swine?), they are definitely weakened, especially upfront where Cavan has struggled though PSG have recently spent well over €20m on ex-Barca forward Jese´

But let us not feel too relaxed – PSG remain an Oiler team who have so much money that they paid €22m to get rid of a manager – that is a Perez! PSG have only lost one of their last twenty home games in the CL and have reached the quarter finals in the last 5 seasons.

Here’s a question. Without googling, do you know who is Arsenal’s top scorer in the Champions League? Have a guess but no cheating.

As to Arsenal, the knowledge that Kos is recovered and will start is a huge fillip – the man has developed into a cornerstone of the team; who would have thought so when Vermælen was our defensive pivot?

The defence picks itself but in midfield we have so many combinations – given that Santi played 90 minutes on Saturday I expect him to be riding the pine. My guess is that Xhaka and Elneny will start with the intention of protecting the back 4 in an away fixture.

Giroud is certain to return but a poor performance could see him behind Perez as our main striker. Many are concerned about OG’s inability to become a clinical finisher but he is the best we have. Perez may well prove to be the player we need but on the evidence of Saturday he has a settling-in period to go through.

This team may be a little too attack-miinded for AW, we may see Theo dropped to make way for Ox or Iwobi who are better defensively.

Can we win? As always my answer is, Why not? Arsene has pointed to the mix of age and experience in the squad. Almost all our players are used to high pressure CL games and this must have a positive effect. Let’s hope so.