On the Dotted Line

It’s an important day at The Emirates.

A new contract for Mr Wenger; yet to be confirmed but the media are convinced he will continue for another two years. No details of wages, sporting directors, new coaches or any real change but perhaps that will happen during the summer.

I have a question … why could this not have been announced at Xmas? Why the cloak and dagger?  Do you think the club will explain their delay? No, neither do I, and  it is high time the club took the concerns of the fans into consideration.

There seems to be a lack of understanding at Arsenal that the club does not exist without the fans – WE are the Arsenal, not Kroenke, not Gazidis, not Arsene Wenger or even the players; they all come and go, we don’t.

Am I being naive? Perhaps, but what would happen if the “magnificent” new stadium was half empty every week as fans become frustrated and find other entertainments to spend their wage on. 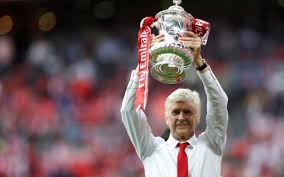 Are you happy AW has re-signed or would you prefer if he had resigned?

I love Arsene but have two concerns – one is that he will die in the job. He looked terrible in early Spring, clearly not sleeping well and under tremendous stress. The other concern is the obvious – can he turn the current squad into PL Champions? Time will tell.

The other big news is the signing (subject to a medical) of the young Nigerian, Henry Onyekuru.

An important signing. Arsenal have a huge fanbase in Nigeria thanks to King Kanu, and from the Youtube clips, this chap is going to be special. Already doing well in the Belgian League (and before you get all sniffy think Hazard, Lukaku, De Bruyne etc) he is the cut-price Mbappe.

Cheap as chips, his signing will not prevent AFC buying a €80+m player or two in summer – at least I hope not.

Mbappe plays on the other wing or centrally so I have not given up hope.

Rumours abound about Mahrez. After his performances in 2016/17 his price must have plummeted. Could be the type of bargain our manager relishes.

France vs Nigeria: Nigeria squeezed through qualification but I like them. Decent footballers with considerable skill, great athletes and a fine kit. Part of my affection is due to spending much time in Nigeria searching for unknown breeds of fish (unsuccessfully!!., And then there is the Kanu factor. I loved Kanu – still do,  a real gentleman and a superb ambassador for his country, oh, and the scorer of the finest hat-trick ever seen at Stamford Bridge. And if that isn’t enough Nwanko remains a committed Gooner as you can see from his website.

The French. I have a love/hate relationship with both the country and the football team. I so much enjoyed the victory in 1998 when Arsenal won the World Cup but I also enjoyed the disaster in South Africa in 2010. This time we have a few lads in the French squad and for that reason I will support them tonight. They have a flaky manager – how else can one explain how Deschamps would  pick Sakho ahead of Koscielny or drop Giroud after an exceptional performance against the Swiss?

Germany vs Algeria: Another African team and one who will give the Germans a tough match. They have surprised many (including BR) with their teamwork but surely tonight is the end of an exciting journey. 4 goals against Korea was a shock but highlighted what an easy group they were in.

Germay will be rightly confident. They are the best European side and have yet to hit top form. With 3 AFC players (plus hopefully one or two more to come) in the squad and at least two to start, they have to be favourites. Nonetheless, if they get beaten it will give our lads a couple of weeks more holiday

Lieutenant-Colonel Richard DidIt DSO and Bar, otherwise known as My Great Uncle Dick DidIt, was far from the hero his gongs would imply. The reality is that the man was simply a massive Con Artist, or what we refer to these days as a Salesman. History is littered with such rogues. Stan Flashman, Gerald Ratner and Harry Redknapp all spring to mind.

Now the reason I mention these unsavoury elements is that while some argue that what we at The Arsenal need is a defensive coach, a midfield thug or perhaps a spendy squillionaire owner, I would argue that what we need most of all is a Salesman. Here’s why.

Some talk of a recession and this will affect football. Utter claptrap. Every second that we sit here, up goes another satellite dish somewhere in the rapidly developing world.  Couple of points on this. The emerging industrial powerhouses of the world have a few things in common. One is, there are one hell of lot of people in them, and the other is many millions of them like their footie very much, and we are going to need them to stay at the top table.

However, in order to garner the support of future generations, we need to know what it is about The Arsenal that appeals.

Most domestic Arsenal Supporters were signed up as a result of emerging from the womb in the Borough of Islington, while some like myself simply followed a Gooner Father who I liked. Others may have had Spud Fathers who they didn’t like and simply did the obvious thing. Revenge.

However, what we know is that millions of bright eyed and highly intelligent young guns from around the globe discover their spiritual homes at The Arsenal. Why?

Whatever it is, we need to be at the top table in terms of desirability. Of course exposure on the world stage through Champions League Football is key, and I know that there are people who will suggest that trophies are the only measure of attracting new followers, but I wonder. What draws in new fans.  Do Utd have such a massive following in the Far East simply because of their Park? I don’t think so. David Beckingham got the shirts selling and the girls screaming. Ronaldo drew in homosexuals and lady boys. This was sensible and clever salesmanship.

Why do we have so many amazing fans in Nigeria? Is it just because of Kanu? Ditto Iceland with Siggi Jonsson? I don’t know but would love to find out. There are Gooners in every corner of the globe.  We are a global brand, a huge family, so what is the glue. What was the first seed? A game? A player?

So, International Gooners wherever you are, we all share the same Mistress. Why?