Chambers is closer to leaving than I realised.

Mertasacker will always be an Arsenal legend.

Holding purposely had his confidence massaged in this game.

Reiss-Nelson is not as advanced as I had hoped.

Elneny should be playing in the first team more.

Wilshere is better than I had remembered. (gone next window) lol

Maitland-Niles is fast, I mean hot damn fast. This was the biggest revelation of the night. Hadn’t noticed this before.

Walcott looks like a poodle when he jogs back after an attack.

Sanchez is the greediest footballer in the EPL. Surprised he played the whole game as he should start on Monday.

“Donny” come to The Emirates

The Rovers were formed in 1879, 138 years ago and turned professional in 1885, they have spent most of their years bouncing about in the lower leagues of English football and currently play in League 1 after gaining promotion from League 2 in 2016/17. Their ground is the Keepmoat Stadium which has a capacity of 15,231 which interestingly is bigger than Premier League Bournemouth’s which only holds only 11,360.

They along with Stockport County hold the record of playing in the longest ever competitive game while playing in Division 3. The match was tied after 90 minutes and remained tied after extra time, the rule at the time was that the game would carry on until one team scored but after 203 minutes the game was still tied so the decision was made to stop the game and have a replay which Doncaster went on to win 4-0.

They won their first major honour when they beat Bristol Rovers after extra time to win the Football League Trophy. 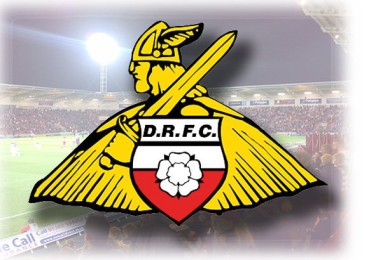 We’ve only played Doncaster 8 times in our history; our first game was on November 30th 1901 when we played in the 2nd division.

The last game was on Dec 21, 2005 in the League Cup, the game was tied 1-1 at full time and Doncaster went ahead 2-1 in the 104 minute and it was not until the 121st minute that Gilberto Silva scored the equaliser – we went on to win via penalty kicks.

Our team that day was: 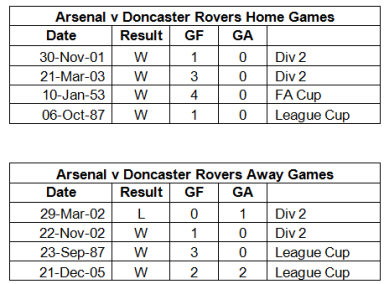 The only time we lost to Doncaster was in 1905, 112 years ago and they have only scored 3 goals against us – so it would take a very brave person to place money on Arsenal losing this game; being a coward I forecast a big win for our kids.