Would Arsenal benefit from purchasing M’Vila and Cazorla?

Arsenal have always not been big spenders in any transfer window, always opting for purchasing players at the age of 15 and 16 for £400,000, rather than spending £25 – £30 million on proven talent, and hoping they become the next big thing. Fabregas is one of the rare occasions where it has actually worked. When Arsenal has been linked to players who have proved themselves at high levels and play for a smaller teams (which happens a lot), we never seem to win the signature of the player, fas was the case with Hazard, and now seemingly Hulk.

This transfer window may be different. The purchase of Podolski before the window and Giroud early on for a total of around £23 million represents more players than had been expected – but is that a good thing? 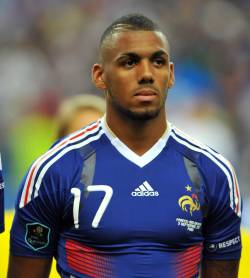 We have continuously been linked with M’Vila, for months before the Euros. Arsenal fans have differing opinions of him. We are now being linked with Spanish international Santi Cazorla.

M’Vila is a defensive midfielder, like Song, who was voted our second best player last season. What you may not know, is Arteta, our fourth best player of the season, was a trainee for Barcelona, and they planned for him to replace Josep “Pep” Guardiola, as a centre defensive midfielder. It was only at Everton, that he was made to play in a attacking role. At Arsenal, he has gone back into that defensive role with Song, which I love to see, and then he can attack when he wants, as well as going into defensive when needed. That’s two defensive players. Wilshere is also due to return early next season, who we have missed, who plays as a box to box midfielder, who is started in a defensive midfield position. So M’Vila would be our fourth defensive midfield player, and like the other three, he would expect first team football.

I have seen M’Vila in a few matches and he is an obvious talent, but he is a player with a poor temperament He was fined by the French FA for his strop after being subbed in the Euro’s, and he reminds me of players who think they are better than they actually are, Bendtner for example. Would Wenger be able to control a player with his attitude? I think the mixture between Arteta and Song’s attacking and defending talent is good, and better than if M’Vila was in the mix.

Then we come to Santiago Cazorla, a talented winger, but again, there is the same problem of already having players in that position. Walcott firstly, if we extend his contract. He’s a player who seems to under preform continuously, we see him start and many think ‘if he doesn’t play well we need to sell him’ and then he plays well for a game or two. Frustrating!

We already have the amazingly talented Oxlade-Chamberlain. Fans beg Wenger to start with him, even Rvp was moaning when he was subbed against Man United.

In addition there is Podolski, a goal machine for Germany. We can’t say whether or not he will be any good, I believe he will. Add to those the young and inexperienced Ryo Miyaichi, who impressed when on loan at Bolton, as did Wilshere. I think he will be the next best thing personally, and hopefully he will. Do a mixture of experience and youth there, and again, all of them want first team and Cazorla would as well.

So both of these players will want first team football. One has attitude problem, and both would be trouble if they weren’t played every week.

But again, both have a lot of talent. Would you like one of them or both at Arsenal?

The Curious Case of Yann M’Vila

Recently we have been strongly linked with Rennes defensive midfielder Yann M’Vila, with reports suggesting he is on the cusp of signing for our great club. A mainstay in the French team, M’Vila has been described as “reading the game like Makelele, the presence of Partick Viera, and can pass a ball like Yaya Toure”. He has received such acclaim mainly due to his robust playing style, high work-rate, great tackling and ability to build attacks. His passing ability is a very underrated part of his game, in fact during the 2010/2011 season M’Vila lead the French League in completed passes finishing the season with a passing percentage of 84%.

So why do we need him at Arsenal?

Simply because he is the missing link in our line-up. Song is a great player but he lacks the discipline needed to protect the back four, plus he takes a while to get into games. The last couple of seasons we have seen a different Song, why? I’m

not sure! Has he been given a licence to create? Or is he not disciplined enough to keep his position? Whatever it is no-one could argue that when on-Song he is almost unstoppable. He is strong on the ball, has an eye for a pass (some beauties this season), and great at breaking up play.

However, for the attacking style of play we adopt a wall is needed in front of the back four, otherwise we leak cheap goals. The back four needs protection! Arteta has helped massively in this department as he has often in games been the deepest lying midfielder allowing Song to wander forward. Without Arteta we have struggled greatly (compounded by the injuries to Wilshere and Diaby), so a midfield enforcer is needed to add some discipline to our line-up.

What does that mean for Coquelin and Frimpong? Frimpong has struggled with injuries (two knee injuries in consecutive seasons) and lacks the experience needed to be the midfield enforcer at Arsenal. It is a shame because Frimpong is Arsenal through and through and a big fan favourite, his time will come though (perhaps after a full loan spell). Coquelin is a tough one, he deserves his chance. Unfortunately injuries to both he and other players has meant Coquelin hasn’t been able to play in his favoured defensive midfield postion, and show Arsene and the fans what he’s all about. I love how he goes about it, he’s tough, great on the ball, composed and a fighter! If M’Vila joins the fold it will be interesting to see what happens with Coquelin, because he is too good to be the third choice defensive midfielder at any club.

Another big question mark is if he joins how will we line-up as a team? Will He slot into a two man wall in front of the back four like Manchester City do? Or does he take the reigns as the main defensive midfielder? Is M’Vila coming in because Song is going to leave the club? Personally i would like us to adopt a 4-2-1-3 because our attacking style leaves us exposed far too often, especially with Sagna and Gibbs/Santos joining in attacks whenever they can. He would be a welcome addition to our team, he is highly rated, and if Arsene is willing to spend a large amount of money on him then we can be confident that he will be a midfield War Machine for the mighty Arsenal.