The title race …. will Arsenal wait on amber or go on green?

Nothing repeat nothing in football would make me happier than for Arsenal to win the title this season, if one could add the relegation of a Mick McCarthy team life would be even more rosy. Add in  the relegation of a Pulis team and my cup would runneth over (is that a naughty expression?) 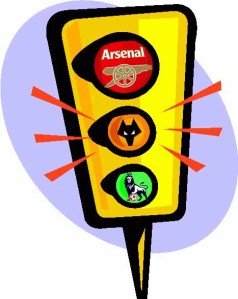 Like millions of Gooners I was down-hearted at 5 p.m. last Saturday, despairing of my flimsy team and the imbecility of 3 men in black whom I wouldn’t trust to referee a park 5 -a-side. Who would have thought Wolves would cheer us up? Bottom of the table, managed by a Cro-Magnon man (just check his forehead) and playing a team who were unbeaten – no-one could have envisioned the result (though those with hindsight would point out Wolves fine record against the top sides).

Wolves last 3 victories were against MU, Chelsea and Liverpool – this is going to be no comfortable stroll, but if we are to confirm our pretensions to be Champions this game is a must win. No silly mistakes, no retaliation to what will surely be a very physical battle, and above all no drops in application or vitality. Hopefully last week’s lapse is a thing of the past and not a harbinger of a sad end to our season.

McCarthy is “bigging up” Jamie O ‘Hara saying he will have a major influence upon the game. Get a Grip man! This is a player who couldn’t get into the first team of Harry’s Muppets. That said, I expect us to go into the game with a weakened midfield, so perhaps MM will be right.

Diaby’s reaction last week undid the fine work he put in during the first half (despite the lengthy discussion on AA I still believe he cost us the 2 points). It is a shame as he played well for France midweek and today would certainly have started, instead I expect to see Denilson start. Song is just returning from a muscle injury and with Barca midweek he will surely be rested. Same with Nasri and JD.  Had Sagna not been banned for the midweek game I would have rested him but knowing that Messi will be fearful of playing against a rejuvenated Eboue, Sagna starts.

This team will hopefully have enough to get the 3 points on offer. Depending on the fitness of Nasri I would play Arshavin, if there is any chance that Samir will not be fit for Wednesday, I would play Rosicky and rest AA who played a full game midweek.

I guess we willl all be tuned into the midday match. I hope for a draw which should Arseanl win would put us 2 points behind MU and 3 ahead of MC with a game in hand. A loss for MC will surely put them out of the title race. Actually, what I really hope for is an abandoned game due to an 18 man brawl with 5 red cards and a 3 points reduction, but if it is not to be I will take the draw.

England’s first ever automatic traffic lights were erected in Prince’s Square Wolverhampton. This is also the home of the mighty Noddy Holder and Slade. One of my early heroes was the Wolves legend, England Captain and Arsenal manager Billy Wright CBE, whom I once had the privilege of meeting. Another of my football faves was the Tipton Terrier – Steve Bull MBE, they don’t make them like him any more (for which Koscielny will be delighted!).

Let this be the continuation of our 8 match unbeaten PL run.