The title race …. will Arsenal wait on amber or go on green?

Nothing repeat nothing in football would make me happier than for Arsenal to win the title this season, if one could add the relegation of a Mick McCarthy team life would be even more rosy. Add in  the relegation of a Pulis team and my cup would runneth over (is that a naughty expression?)

Like millions of Gooners I was down-hearted at 5 p.m. last Saturday, despairing of my flimsy team and the imbecility of 3 men in black whom I wouldn’t trust to referee a park 5 -a-side. Who would have thought Wolves would cheer us up? Bottom of the table, managed by a Cro-Magnon man (just check his forehead) and playing a team who were unbeaten – no-one could have envisioned the result (though those with hindsight would point out Wolves fine record against the top sides).

Wolves last 3 victories were against MU, Chelsea and Liverpool – this is going to be no comfortable stroll, but if we are to confirm our pretensions to be Champions this game is a must win. No silly mistakes, no retaliation to what will surely be a very physical battle, and above all no drops in application or vitality. Hopefully last week’s lapse is a thing of the past and not a harbinger of a sad end to our season.

McCarthy is “bigging up” Jamie O ‘Hara saying he will have a major influence upon the game. Get a Grip man! This is a player who couldn’t get into the first team of Harry’s Muppets. That said, I expect us to go into the game with a weakened midfield, so perhaps MM will be right.

Diaby’s reaction last week undid the fine work he put in during the first half (despite the lengthy discussion on AA I still believe he cost us the 2 points). It is a shame as he played well for France midweek and today would certainly have started, instead I expect to see Denilson start. Song is just returning from a muscle injury and with Barca midweek he will surely be rested. Same with Nasri and JD.  Had Sagna not been banned for the midweek game I would have rested him but knowing that Messi will be fearful of playing against a rejuvenated Eboue, Sagna starts.

This team will hopefully have enough to get the 3 points on offer. Depending on the fitness of Nasri I would play Arshavin, if there is any chance that Samir will not be fit for Wednesday, I would play Rosicky and rest AA who played a full game midweek.

I guess we willl all be tuned into the midday match. I hope for a draw which should Arseanl win would put us 2 points behind MU and 3 ahead of MC with a game in hand. A loss for MC will surely put them out of the title race. Actually, what I really hope for is an abandoned game due to an 18 man brawl with 5 red cards and a 3 points reduction, but if it is not to be I will take the draw.

England’s first ever automatic traffic lights were erected in Prince’s Square Wolverhampton. This is also the home of the mighty Noddy Holder and Slade. One of my early heroes was the Wolves legend, England Captain and Arsenal manager Billy Wright CBE, whom I once had the privilege of meeting. Another of my football faves was the Tipton Terrier – Steve Bull MBE, they don’t make them like him any more (for which Koscielny will be delighted!).

Let this be the continuation of our 8 match unbeaten PL run.

Your girlfriend is right after all……Size Does Matter

Today’s post was written by Red Arse over the weekend and continues the discussion about serious injuries.

Like most Arsenal fans, I greeted, with relief and joy, the news, that “Rambo” Ramsey was not far from resuming full time training, with a view to returning in the New Year. It is wonderful, not just for us as fans but for the player himself.

But it led me to think back to the horrific injury that we were shown happening to him, in all its gory detail, on Sky TV, in full HD close up. The recollection brought an involuntary, empathetic shudder as, in my minds eye, I saw his leg bending in several completely unnatural directions and how it appeared to be held together only by virtue of his red and white sock. Yeuk and double Yeuk! I felt sick to my stomach reliving it, even in flashback.

But, hold on, that was not Rambo I was envisioning, it was Dudu, smashed by Taylor; but no, oh God, no, it was neither, it was Diaby, with his ankle apparently sheared off at Sunderland. Wasn’t it?

Well, it seems that they have all become one amorphous whole, each as shocking as the other.

This week’s news, that Danny Murphy had lambasted the thuggish gorillas, sent out by even more thuggish managers, to brainlessly assault more skilful players in more skilful EPL teams, in a manner likely to cause appalling career threatening injuries was amazingly refreshing and unexpected. He even named names; Fat Sam, stupid McCarthy, sickening, self justifying Pubis. Wow!

Picked up by other publications, his comments received mainly positive responses, with many a sage nod of the head, and a general agreement that such thuggery was wrong and that something must be done to curtail these wanton acts of aggression.

Contrast this with the xenophobic “Whingeing Wenger” headlines that greeted similar comments by our esteemed manager. The same moronic “it’s a man’s game”, and “I know him, he would not do that deliberately”, yada, yada, were soon churned out by said thuggish managers, of course.

Sometime ago, I wrote a Post highlighting the cretinous cabal of professionally limited managers, who encouraged and condoned this appalling, “in their faces”, tactic, inflicted by their physically imposing but cerebrally challenged minions. To Danny Murphy’s list I had added Mark Hughes, Owen Coyle and others, on the margins, whose teams occasionally dabble too.

Surprise, surprise, several of the usual suspects popped up; Kevin Davies, Shawcross, and de Jong among them, claiming they had always behaved like choirboys and their sainted managers had never issued any such instructions, nor incited them to inflict damage on skilful opposition players.

Now, at this point, I intend to leave that stream of thought and perhaps shock you, by coupling these Neanderthal antics with our lack of success, in recent times.

Following our defeat by Chelsea, I have lost count of the number of times opposition fans have said, “Your team were out muscled and well beaten” or “They never remotely looked capable of winning, because they were up against a better team, who were far stronger, taller, heavier and more powerful”.

I also lost count of the number of times I denied this was so. “We played well, and were unlucky to have lost”, I said, “We could have won, if we had taken our early chances”, and so on, and so forth.

All the time, at the back of my mind, I was thinking the unthinkable. “These guys could be right!”

In my opinion, even though I think Arsène is the best manager I have ever seen, I think he is complicit in our setbacks against the other top 4 teams, or the intimidating tackling and long ball tactics used against us so often. This is as a direct consequence of the type and size of players he has bought for us, over recent years.

We have often argued on this site about the pace or strength of our current players, with the implicit criticism, by some of us, that they were not quick enough or big enough physically.

Underlying this argument is the indisputable fact that when we were kings of the EPL, winning not just one, but two Doubles, we had in our team colossal players like Tony Adams, Martin Keown, Paddy Viera, Sol Campbell and many others like Manu Petit, Titti Henry and the incomparable Denis “Iceman” Bergkamp. I use the term “colossal” advisedly.

They not only had great skill, but they were giants physically. All of them strapping fellows with muscles on their muscles; they were all well over 6 foot tall, with great long ball winning legs, and a hard bitten, “take no prisoners” attitude in the winning of titles.

And then it all changed! 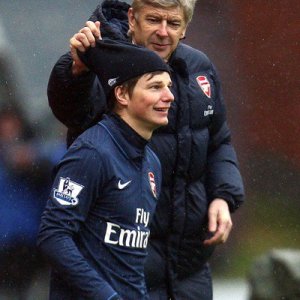 Arsene fell in love with seemingly fast, small, amazingly skilful players. Their brand of football is an entertaining, breathtaking style, with fast flowing, exquisite passing at its core. This appetite for physically small skilful players has now extended to defenders, with our latest recruits having very modest physiques.

Unfortunately, these little guys do not win against the “Big” teams. And they do not win trophies.

That is the crux of my disquiet. For reasons I do not pretend to understand, AW has decided that our best chance of winning trophies is by recruiting players half the size of those wonderful Double winning teams of yore!

This is not working! Please, Arsene, change your mind!