Vote for your favourite defenders from Arsenal’s modern era

Today you get to vote for your favourite defenders from Arsenal’s modern era. The articles published on Tuesday, Wednesday and Thursday of this week provided in depth profiles on our best defenders spanning from Peter Simpson who played his first game in 1960 to the present day.

To provide a broader picture of readers’ preferences, you can vote for up to 3 players in this poll.

Thanks to GunnerN5 and Gooner In Exile for this excellent series of posts providing a forensic analysis of the best players in Arsenal’s history. Today we conclude the defence …. next week we start the midfield.

Continuing our Summer series of articles in search of Arsenal’s greatest ever team, this week we continue to highlight the defenders.  Don’t forget to take the opportunity to choose your personal favourite defender by voting in the poll at the end of the week

Kenny played in 394 games over an 8 year period.

He was born in Camberwell, London. While still at school, Kenny played for the Crystal Palace youth team, and made his first team debut for them at the age of just 16. In 1977 he captained the Palace junior’s team to FA Youth Cup success; he also skippered the England team at the same level. In his first 156 games he only missed playing in one league fixture. The team quickly progressed from the old Third Division in 1976, through the divisions to Division One, which they briefly topped by the end of 1979.

Arsenal had been scouting Kenny and in the summer of 1980 they put in a bid of £1million, with striker Clive Allen going to Crystal Palace in exchange; this was a controversial move, as Allen was a prized young player and had only joined Arsenal weeks earlier. That same summer he played for England in the 1980 European Championships in Italy.

He made his Arsenal debut in August 1980 and was a regular for the next two seasons, and a near-constant figure at left back for Arsenal for the next six years. He was voted Arsenal’s Player of the Year in 1981, but it took him seven years to win a trophy, with the Gunners largely underachieving through the early and mid-1980s.

It was from his England career that he earned the most praise and recognition he was rarely out of the team and played in the 1982 World Cup in Spain. He remained as the first choice left back for the 1986 World Cup in Mexico and played in every game up to and including the quarter final loss to Argentina, and was one of the England players who witnessed Diego Maradona’s ”Hand of God” goal.

He rarely missed a game for England between 1980 and 1988, with the only competition for his position coming in 1987, when Nottingham Forest left back and Captain Stuart Pearce was given his England debut. However Kenny remained as the regular left-back during England’s 1988 European Championship qualifications. To this day, he remains as England’s second-most capped full back after Ashley Cole and only a handful of players have received more caps.

He finally won some silverware with Arsenal in 1987, captaining Arsenal to a League Cup final victory over Liverpool at Wembley; he was instrumental in the win as he set up Arsenal’s late winner, scored by Charlie Nicholas. The following season he fell out with manager George Graham and was replaced as captain by Tony Adams, who was just 21. He did, however, keep his place in the side even though Arsenal had just signed a long-term replacement in Nigel Winterburn, Nigel played at right-back in his first season rather than his accustomed left back.

He left Arsenal in December 1988; Arsenal had signed Lee Dixon and had reshuffled the side, with Dixon playing at right-back and Nigel Winterburn on the left. He continued to play for many years playing for Newcastle United, QPR, Coventry City, Everton, Brentford and Watford.

David played in a club record 722 games over a 20 year period.

He was born in Stoke Newington; London moved to live in Dublin at the age of three.

A Shelbourne schoolboy player O’Leary signed for Arsenal as an apprentice in 1973. He soon progressed through the ranks at Highbury, playing in the reserves at the age of 16. He made his debut for Arsenal against Burnley on in 1975, and despite being only 17, went on to make 30 appearances that season. For the next ten years he was ever-present in the Arsenal side, playing more than 40 matches a season (except for 1980–81, when he was injured and played in only 27). 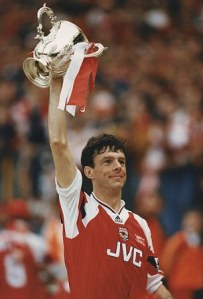 David was noted for his good positioning and elegant style of play. He won his first major honour with Arsenal in a win over Manchester United in the 1979 FA Cup Final. He also played in the 1978 and 1980 Cup finals, and the 1980 Cup Winners’ Cup final, all of which Arsenal lost. In 1982 he became club captain, but relinquished it to Graham Rix eighteen months later.

O’Leary broke numerous appearance records at Arsenal; he was the youngest person to reach the 100 and 200 match milestones, making his 400th appearance while still only 26. He passed George Armstrong’s all-time record of 621 first-team games in November 1989. By this time, O’Leary was no longer automatic first choice (with the partnership of Tony Adams and Steve Bould at the centre of George Graham’s defence), but he still turned in over 20 appearances as Arsenal won the 1988–89 First Division title thanks to a 2–0 win over Liverpool, at Anfield on the final day of the season.

He won another League title in 1991 and an FA Cup and League Cup double in 1993, though by this time he was mainly used as a sub. He holds Arsenal’s all-time record for appearances, with 722 first-team games, and over 1000 games at all levels in a twenty-year long association with the club.

He joined Leeds on a free transfer in 1993 after 19 years at Highbury. Throughout the1993–94 season he was a regular player in the Leeds side until he suffered an injury to his Achilles , which ruled him out for the whole of the following season. He gave in to his injury and announced his retirement from football at the age of 37.

The highlight of his 68-cap international career came in the 1990 World Cup. With Ireland in a penalty shootout with Romania, he stepped up to take the decisive final penalty to win the shootout 5–4. He only played 26 minutes in the tournament after replacing Steve Staunton in the Romania match.

When the former Arsenal manager George Graham was put in charge at Leeds United in September 1996, O’Leary was installed as his assistant. He remained as assistant for two years and he was made manager shortly after Graham moved to Tottenham. After several good seasons, including making the semi-final of the Champions League, the team went through a dramatic loss of form that ended with Leeds sacking him in 2002.

These are some of his thoughts (from Arsenal.com) after Arsenal won the FA Cup replay in 1993.

“We did a lap of honour with the trophy and before I got to the tunnel I thought to myself “‘this is the last time I’ll ever wear the Arsenal jersey again”. It was an amazing night, a brilliant way to end 20 years, but it was such a sad night for me as well.”

It was a night that stretched well into the early hours as the players let off steam after making history. And O’Leary went home with an extra companion when the celebrations finally died down.

“That night – I’ll always remember this – I took the FA Cup home. No one else seemed to be responsible for it so I took it with me.

“My wife drove us home and I remember sitting in the front with the FA Cup in my lap and somebody pulled up at the lights, seconds before it went green, and he looked over and then looked over again, thinking ‘is that David O’Leary with the FA Cup?!’ We pulled away and I still don’t know if that guy thought he was imagining things.

“I remember getting home that night and I thought, if my house gets robbed they are not going to take the FA Cup, so I took the cup up to my bedroom. My kids were young then and the following morning they came in and saw the FA Cup there on the side of the bed.

“That morning I took it to the club and gave it to Ken Friar. I said goodbye to Ken, I actually went to the steps of the old directors’ box at Highbury, had a look out there for the last time, and said to myself ‘hey, it’s been a fantastic 20 years, I’ve been so proud to play here, thanks for putting up with me’.

“Then I walked away, and that was that.”

He was born in Stoke-on-Trent and signed for his hometown club Stoke City as a schoolboy in 1978, turning professional in 1980.

He spent seven seasons with the Potters and as he gained a reputation, as one of the best central defenders in the 2nd Division, it became inevitable that he would move to one of the big clubs. He was scouted by both Everton and Arsenal and after lengthy discussions Steve chose Arsenal and a tribunal set the price at £390,000 – a small fee compared to what Stoke was demanding. Signing in June 1988 he became a part of Arsenal’s formidable and famous back four with Tony Adams, Nigel Winterburn and Lee Dixon, his former Stoke team-mate, winning 9 major honours.

Steve was a member of the team that won the Cup Winners’ Cup 1993–94, and was also in the squad that won the double in 1997–98 – he famously set up Tony Adams with a chipped through ball, for the final goal in Arsenal’s 4–0 win over Everton, the match that won them the Premier League title. Two weeks later they won the FA Cup.

In his final season Arsenal reached the FA Cup semi-final, losing to Manchester United, and then a month later they also beat Arsenal to the Premier League title. Steve left the Gunners in 1999 and ended his playing career with Sunderland.

He became assistant manager, to Arsene Wenger in May 2012, following the retirement of Pat Rice.

Written by GunnerN5 and complied by Gooner in Exile