According to reports yesterday the president of Real Sociedad has said that we have triggered our buy-back option for Carlos Vela.

The actual quote (after translation) was: “Arsenal have informed us that Vela would be with them next season.”

On the face of it, re-signing a striker who bagged 21 goals in the Primera Liga and who knows Arsene Wenger and the Arsenal way could be seen to be very good business.

Especially if the much quoted £3.5m buy-back fee is an accurate figure.

The return of little Carlos will no doubt make some supporters groan.

When he was with us he had a reputation as a bit of a party animal, but criticism of his on-field displays was sometimes harsh: it’s not like he ever got a regular run in the team.

Let’s put it this way, if we heard we were buying a 21-goal striker from the Spanish league (but a player of whom we had no previous knowledge) we would all be getting quite excited.

However, even if we have activated our buy-back option, I’m not sure we will ever see Vela in an Arsenal shirt again.

He could well join us “on the books” for a short while only to be moved on for a decent transfer fee or as a makeweight in another deal.

He could become the Clive Allen de nos jours.

For those who don’t remember, Clive Allen was once of the hottest young strikers in Britain back in the late 1970s. So when we signed him from QPR in 1980 – coming off a season in which he scored 32 goals in 49 appearances – we fans were well chuffed.

He was going to link up with Frank Stapleton and Alan Sunderland in what the press were already calling our “SAS attack”.

But the SAS never got out of headquarters. Within a few weeks of being bought, Allen was out through the exit door and on his way to Crystal Palace, with Kenny Sansom coming in the opposite direction. Clive never kicked a ball in anger for the Gunners.

There were rumours at the time that Palace had wanted to buy Allen direct from QPR but, for some reason, QPR did not want to sell him to the south Londoners. So in some kind of murky deal we scooped up Allen before promptly passing him to Palace. Still, it wasn’t all bad since Sansom turned out to be arguably the best left back we’ve ever had.

So what do you think?

Do you believe we have activated our Vela buy-back?

And if so, is he coming back to stay (in which case is he the shiny new striker we’re all expecting, or is he filling Bendtner’s berth as the third choice man)?

Or is he going to follow the Clive Allen path and simply whizz into the turnstile and straight back out again?

(Whatever happens, I hope his career doesn’t follow the trajectory of Allen’s when he left us. Not long after going to Palace he ended up playing in the N17 refuse dump. He ended up there again in an assistant managerial capacity much later, where his main job appeared to be eating doughnuts).

Here’s a Thought, Gooners – We’re all thinking too much

It’s surely somewhat paradoxical, but I feel the only way us Gooners are going to stop thinking so much about football is to actually watch it.  What separates us humans from the other animals (and those unfortunate sub-human Spurs supporters) is the ability to think about such a wide variety of things that may or may not be troubling us.  Thinking about mortality.  Thinking about Cesc and his DNA.  Thinking about buying Koscielny a round of protein shakes. 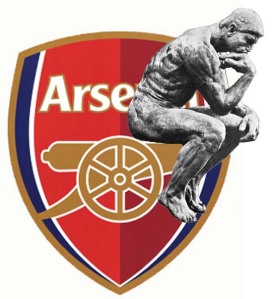 I’ve been a full-fledged Arsenal supporter now going into my sixth year, never really missing a match (even watching the taped Stoke match and the Ramsey incident late the afternoon the day I got married this year), and I probably can’t tell you all the interesting things I’ve learned about football.  The transfer window and how teams are always contemplating a “shock swoop” or “raid” of a certain player.  Holy shite, the diving (Rooney, you c&nt).  And, damn, Sam Allardyce, are we sure it wasn’t you that had Princess Leia tied up in ‘Jedi’?  And then there’s the Arsenal.  I’ve learned that Wenger is stubborn and really likes his players to fit in the overhead compartments of airplanes.  I’ve learned that the media and the referees do in fact have a bias against the club.  And I’ve learned that we are in fact blessed with some of the most beautiful football on the planet on a weekly basis.

But the other thing I’ve come to learn, and something that’s really manifested itself to me this offseason, is that us Gooners are a hopelessly cerebral, smart, and over-thinking bunch (Highbury Library, anyone?).  Are the blogs and the comment posters like myself on the blogs a fair representation of the Arsenal fan population?  Because if so, the lot of us have gotten a wicked case of the mental blue balls this offseason, with no big Wenger spending spree to relieve us.

I follow a few of my cursed local teams here in Chicago, none as closely as our beloved club mind you, and I must say that nothing here compares to the passion and knowledge of this fan base and how impacted on a deeply emotional and intellectual level we are about our depth at centre back.  Is that why it seems sort of quiet at the Emirates at times?  Everyone’s thinking about stuff?

I’ve been reading the Arsenal blogs for some years now, some I like, some not so much.  Some extreme, some benign.  But this offseason in particular, I think we’ve started to go a bit overboard.  Blame it on Barcelona, or Wenger’s frugality, or Capello’s squad not being cuddly and lovable on any level, but we’re spending too much time thinking about the squad this offseason.  We all seem a bit disoriented (probably ever since Wigan), a little powerless, very frustrated from the near misses over the last few years.  And we all seem to be thinking harder than ever as to how we can alleviate these feelings.  Mostly, we can’t stop thinking and talking about what we don’t have.

I’m here to kindly suggest we start embracing what we do have here, and it’s not something I’ve been consistent in doing.  It’s not a feeling resignation, but more of a happy abandon. We’ll need some luck, sure, but anyone winning the title will have enjoyed a material amount of luck along the way.  There’s still a tremendous amount of hope and the bookies don’t vehemently disagree at 7-1 odds for our boys. And what should give us hope?  Actually watching the game we spend so much time thinking about.  Did any of you feel the excitement, the pride, a touch of optimism last weekend as the fantastic red and white, under the unusually blue sky, glided artfully across the perfect green pitch?  Watching Jack almost nail one out of mid-air from outside the box?  Watching Frimpong be a human pinball?  Seeing Nasri look like a completely new man?  Vela doing what we’ve always hoped?  Chamakh and his powerful ballet?

If you spent any significant time whilst watching these matches this past weekend thinking about Cesc or Mertesacker or Schwarzer, then you’re not doing a good enough job watching. We’re just about here.  No more thinking about it.  Just doing.  Win or lose against Liverpool, with or without Cesc, having 2, 3 or 7 centre backs on the team.  It’ll just feel good to feel drained after a match again.  Too tired to think.

Arsenal Untested ….A Friendly Stroll in The Park

With yet another good workout satisfactorily completed the thoughts will turn to The Emirates Cup, where we might really begin to judge our squad at a much higher level, but I will leave that for another time.

The first thing that struck me last night was the stadium, the infamous Sportzentrum Neusiedl. Even allowing for the fact that Neusiedll were being compared to a Conference side, it appeared that someone had quickly assembled a pitch in a far flung park somewhere in eastern Austria. Nevertheless there was a capacity crowd of 2500, amongst which I must have spotted at least 400 kids happily enjoying their ice creams.

Back to more serious matters. We had learnt earlier in the day that Sol had finally decided to leave us for the heady heights of Newcastle and I’m sure all of us wish him well and even at the ripe old age of 36, I feel it would have been beneficial to have him still in our squad. This was further compounded with the sad sight of Djourou leaving the field after barely 20 minutes, and this may turn out to be a blessing in disguise, as the need for a centre back is now a must.

I won’t give you a match report as it wasn’t really a game, but in the first half Nasri shone way above anyone else and looked sharper than ever. Wilshere also had a fine first half and was reintroduced midway through the second half. I hope the boss was thinking that the lad is now ready to be an active member of our first team squad.

Frimpong, after a slow start impressed yet again, and it was as nice to see Carlos score with his customary chip, as it was to see Theo score and Chamakh cooly slotting in his first goal for the club from the penalty spot.

Many were surprised to see Almunia start let alone as captain, but I wouldn’t read too much into that. For those who were not aware, Rosicky was withdrawn 10 minutes before the start.

Generally we still look vunerable in defence and again our crossing needs to improve dramatically. This is a real issue for me, but on the other hand we will see a radically different line up for the first game at Anfield. Arshavin is a canny player and one gets the impression, not for the first time, that he is saving himself for the games that really matter.

All in all maybe a few questions were answered for the boss and finally it was nice to see Gibbs back in the team, though he may well need a good few weeks to regain his sharpness. JET for a big lad had a very compact game, but I doubt he is quite ready for the first team, and a word for Mannone who has hardly been mentioned lately, a good penalty save and basically nothing much else to do.

Roll on Saturday and A.C.Milan.