Time for another vote in our summer quest to find our greatest squad. And as in previous weeks you have the chance today to vote for midfielders from our earlier era’s. Don’t worry your recent heroes come next week.

You can vote for up to 3 players if you find the decision difficult,

If you’ve missed out on reading the excellent articles earlier this week check out Tuesday, Wednesday and Thursday’s posts.

Written by GunnerN5 and compiled by Gooner in Exile

Continuing our Summer series of articles in search of Arsenal’s greatest ever team, this week we begin our quest for the greatest midfielders to include in our team.  Don’t forget to take the opportunity to choose your personal favourite defender by voting in the poll at the end of the week.

John made 284 appearances over a 14 year period.

Born in Eaglesham, Renfrewshire, John first played for Airdrieonians, but in 1898 he was signed by Woolwich Arsenal as one of manager William Elcoat’s many Scottish signings. A strong muscular centre half, he made his debut for the Gunners on the first day of the season on 3 September 1898, missing only four games of his first season. 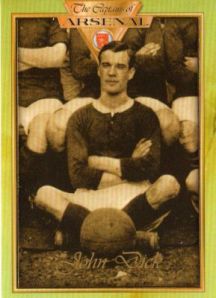 He was also a competitive cross-country runner and was known for his formidable endurance, once recording a time of 33’ 45” for a six-and-a-half mile race. He was a near constant in the Woolwich Arsenal side for the next six seasons, missing only one game in 1899-1900. Although he was not known for his scoring, he did manage to score thirteen times in his Arsenal career, including scoring twice in a 12-0 demolition of Loughborough on 12 March 1900, the Gunners’ record win in a competitive match.

He was moved to right half, in 1993 but continued to be a first team fixture as Arsenal won promotion from the Second Division to the First Division in 1903-04. In the meantime he had also become club captain, though by the time promotion had come round, fellow Scot Jimmy Jackson had taken over as skipper.

He played as first-choice right half for in Gunner’s first season in the top flight, becoming one of the first Arsenal players to play in over 200 matches. At the beginning of the 1905-06 season his place was taken by John Bigden, and he stepped down to the reserves. He continued to play sporadically for the first team for the next five years, but never regained a regular place.

In the summer of 1912 he left Arsenal to coach abroad in Prague, and became known for being one of the early pioneers of football in Czechoslovakia, where he coached Sparta Prague. Little is known about John after this period.

In all, he played 284 games for Arsenal in the League and FA Cup, and 30 in other first-class matches.

Roddy made 346 appearances over a thirteen year period.

Roddy was born in Inverness and moved to Canning Town, London at the age of 20, to work at the Thames Iron Works, and joined the works football team the Thames Ironworks FC.

He was a left half-back with a reputation for tough tackling and was a regular for The Irons in the 1898-99 season, helping them to win the Southern League Division Two title. He was again an ever-present the following season, and again during Thames Ironworks’ first season under their new name, West Ham United.

Roddy was also one of the Irons’ first players to turn professional and during his time as a player for the club he appeared in 113 matches scoring 6 goals. In May 1902, he moved south of the River Thames to join Second Division side Woolwich Arsenal, later being joined by ex-West Ham team mates James Bigden and Charlie Satterthwaite.

He made his debut against Preston North End on 6 September 1902, which was Woolwich’ first period of success, finishing third in the 1902-03 season, and then second in 1903-04, which won them promotion to the First Division. Roddy, playing at left half, was near ever-present, and although the Gunners were only a mid-table team in their first stint in the top flight, they reached the FA Cup semi-finals in 1905-06 and 1906-07.

Roddy continued to be a stalwart in midfield for the next four seasons, as Woolwich Arsenal finished sixth in 1908-90, with him missing only two games that season, but by 1911 he was 33 and was displaced by fellow Scot Angus McKinnon. He remained at the club for another three seasons as McKinnon’s understudy, although by now the club had fallen on hard times, and were relegated in 1912-13. He played his last first-team match for Woolwich Arsenal on 22 November 1913.

The arrival of World War I suspended all first-class football in England, and with it his career finished. In all he played 346 games for Arsenal in thirteen years, every single one at left half – never scoring a goal.

He holds the Arsenal club record for the most appearances by a player without winning a cap or a medal.

Billy made 343 appearances over a fifteen tear period.

Born in Dalkeith, Midlothian, Billy played as a schoolboy for local junior side Wemyss Athletic. For a short period of time he played for Manchester City before signing for Arsenal in May 1914.

He made his debut for the Gunners, in a Second Division match against Huddersfield Town on 21 November 1914, a game that Arsenal lost 3-0. He made twelve appearances in 1914-15 but by then World War I had broken out, and he joined the Royal Army Service Corps, serving in France.

When football resumed, at the end of WW1 hostilities, he returned to Arsenal and immediately became a regular in the newly-promoted side. An energetic midfielder, he usually figured on the left of midfield, as a left half or inside left. He became a mainstay in the side, with over 300 league games in ten seasons, becoming club captain in 1925. He also played in the 1927 FA Cup Final, Arsenal’s first cup final, which they lost 1-0 to Cardiff City.

He was transferred to Birmingham in May 1929, playing his last first-team game in September 1930 before retiring at the end of the 1930–31 season. Billy also starred in one of the first football-related films, the 1930 production The Great Game. After retiring, he moved back to Scotland, and ran a pub in Port Seton.

In total, he played 343 matches for Arsenal, scoring 51 goals.

Written by GunnerN5 and compiled by Gooner in Exile