The Princes and the PEA: who will take advantage of Auba’s absence?

It’s disappointing news that the club’s appeal against Pierre Emerick Aubameyang’s red card has failed and he will miss the next three matches.

I know I’m in a minority in thinking the ref’s original decision (yellow card) was correct after Auba’s wild tackle on the Crystal Palace midfielder Max Meyer at the weekend. There was no malice, just a combination of over eagerness and bad timing.

But what’s done is done.

Now, as Mikel Arteta says, we have to see the next three games as an opportunity for the understudies to our funky Gabon to step up and be counted.

Auba is our attacking king, which means there are several princes who would love to take his crown. Which of them do we think will thrive while the monarch is missing? 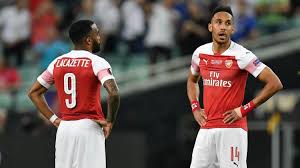 If Auba is the king, then Laca is the prince-who-once-was-king. His finishing and poaching instincts in and around the box have made him a consistent scorer since he arrived in N5, but his current dry spell makes the Sahara look like a jacuzzi. It’s likely that he will continue to be the central striker, which means his role will not significantly change while Auba’s out. But maybe there’ll be a psychological boost because he’ll know that (a) we’ll be relying on him even more without his strike partner and number one chum and (b) maybe Auba’s clinical record in front of goal has been intimidating Laca and this opportunity to be the main star all on his own might be just what he needs.

Summary: Cometh the hour, cometh the man. The Lion of Lyon will find those long-lost scoring boots at last.

I feel we’re still a long way from seeing the best of Pepe. He has shown glimpses of real class and we know he can finish. But his performances are also erratic and he tends to lose the ball more than one would like. Nevertheless, if he gets the game time this could be a chance to show he can make up for Auba’s absence.

Summary: I have a funny feeling Pepe is going to chip in two or three goals in the next few games if – and it’s a big IF – he gets the on-pitch minutes.

Obviously Ozil’s role is not directly affected by the lack of Aubameyang, but will he be encouraged to be more aggressive about getting on the scoresheet himself? He is surprisingly patchy in front of goal for a player with such sublime footballing gifts, but we have seen him score some lovely goals over the years.

Summary: Unlikely to be our saviour.

Aged just 18, Bukayo Saka has been one of the success stories of the season. He has shown energy and ability as a wide attacker, has filled in valiantly at left back when needed and even managed a couple of goals in the Europa League. On the face of it he could come in as a straight replacement for Aubameyang in the left forward role.

Summary: Not a shabby option by any means, but will he get the nod ahead of Martinelli?

For my money the young Brazilian is the most exciting prospect among the emerging talent at Arsenal. Although still raw (he’s also 18) he has shown hints that – if he continues to progress – he could develop into a Ronaldo/Van Persie type of player. He is brave, decisive and can score with both feet and with his head. If he is preferred on the left wing while Auba’s out he could do very well indeed.

Summary: Probably the fans’ favourite to start in place of Auba. If he does, expect him to do well.

Reiss Nelson seems further down the conversation surrounding our attacking options when compared with Martinelli, Saka, Pepe or even Nketieh. But there are rumours that Arteta sees something of a Raheem Sterling in him and he has impressed in his recent outings.

Summary: It wouldn’t be a total surprise (to me, anyway) if Nelson got a lot of game time in the coming fixtures.

In conclusion, I expect Lacazette to continue as central striker for the two up-coming league games (Sheffield United and Chelsea). I think Pepe will start on the right for those games with Martinelli on the left.

For the FA Cup tie away at Bournemouth I’m guessing Martinelli as central striker (a rest for Laca), with Nelson on the right and Saka on the left.

But no combination would surprise me as Arteta continues to figure out how to get the most out of his squad.

Who will emerge as our golden booted hero in the next week-and-a-bit? My money is on Lacazette, with a key supporting role from Pepe.

This entry was posted on Friday, January 17th, 2020 at 8:47 am and is filed under Uncategorized. You can follow any responses to this entry through the RSS 2.0 feed. You can leave a response, or trackback from your own site.

11 Responses to The Princes and the PEA: who will take advantage of Auba’s absence?