I have to admit to feeling disconsolate after last weeks draw against Crystal Palace. Not because we played badly or gave the game away but because ‘lady luck’ was definitely against us in the way, Torreira went off at half-time,  Palace scored and how Aubameyang went into a tackle that got him sent off. In all honesty Aubameyang was probably just as disconsolate as me and hopefully he still had some Xmas chocolate too.

So, today we begin a run of three games without our captain and main goal scorer. In yesterday’s post, Rocky discussed how others will need to step up to the plate and start putting the ball in the back of the net. Since playing under Arteta, Aubameyang was also working hard defensively and so we’re going to miss that part of his game too. 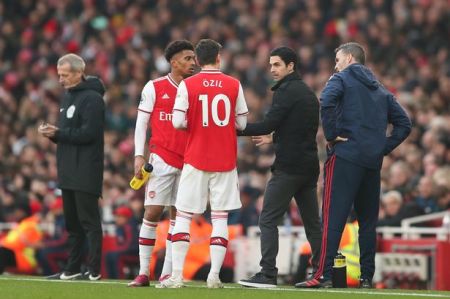 But, as others have discussed, the opportunities are there for Martinelli, Nelson, Lacazette and Nketiah to make it hard for Arteta to leave them out. I’m looking forward to seeing them at some point. Last week I suggested that Lacazette would have found his scoring boots, but he hadn’t …….. come on Laca, do it in front of the home crowd.

There will be late tests for Kolasinac and Torreira. Torreira will be a huge miss as was evident in the second half against Palace, no-one else can do what he does as effectively. Pepe or Nelson to start? Arteta has been saying great things about Nelson and that Pepe needs to improve in training.

Sheffield United have a great away record sadly, although they have lost in their last two outings and their record against London teams isn’t good. Clutching at straws there because we need a win and having sent The Emirates into delirium against Man U I’m hoping it’s three points for the good guys today.

Arteta had this to say about Sheffield United

“I’ve been very impressed. Everything they do has a real sense, they are really difficult to break down.

“The solidarity in their team is incredible, how hard they work for each other and they have very clear principles – in attack and in defence.

“So it will be a very difficult test. I already warned the players today.”

Lets hope the players heed the warnings this time and come out ready for a fight. Sheffield United have the least number of shots on goal (71) in the league ……….. I’ll just leave that there 😉

I’m suggesting this team for today …………

The sun is going to shine all day in North London and our mate chas is coming to the game. Great omens.

This entry was posted on Saturday, January 18th, 2020 at 9:18 am and is filed under Uncategorized. You can follow any responses to this entry through the RSS 2.0 feed. You can leave a response, or trackback from your own site.