According to AA’s transfer correspondent RC78, all the signs are that Kieran Tierney will be the first top quality player to join Arsenal this transfer window. 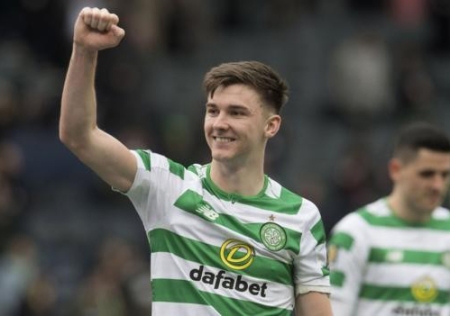 In characteristic  style, we are testing the water with bids well below Celtic’s valuation. So far offers of £15m and then £17.5m have been rejected with Celtic holding out for a package thought to be in the region of £25m. It seems likely that if we dig a bit deeper and come up with £20m plus add-ons, the player will be ours.

Celtic are prepared to sell and the player wants to come to The Arsenal. Much as I admire Nacho, he’s been a great servant to the team, but we need to invest in the future and 22 year old Tierney is a much needed upgrade.

The Celtic supporters love Tierney. Although still only very young, he has captained the side and consistently put in performances to a very high standard. He has his own song on the terraces, and this one  was was released … it’s worth watching for the bullet left foot shot into the top corner from 40 yards ….

Don’t get too carried away by that goal, he’s not (currently) a prolific goalscorer having scored 5 goals in 102 league appearences for Celtic, but he does embody all the attributes that it appears Unai Emery seeks in his players.

He’s strong, aggressive in his play, works very hard but has the pace and skill to get forward and deliver quality crosses into the box. Physically he’s perfectly built for the role of left back. He’s 5ft 10in, lean and muscular … and brave. He’s not a player to give up on a 50/50 ball or to shirk a hard challenge .. he’s a winner.

We need to spend our £40m transfer budget wisely. If half of it goes to buy Tierney and we can find another player of similar age and quality to reinforce elsewhere on the pitch then the task or rebuilding Arsenal will be off to a good start.

Arsenal have had many great players from North of the border over the years … and from Ireland for that matter. Let’s hope that with KT, we return to some of those great old traditions and put some Scottish steel in our back line.

This entry was posted on Saturday, June 29th, 2019 at 8:05 am and is filed under Uncategorized. You can follow any responses to this entry through the RSS 2.0 feed. You can leave a response, or trackback from your own site.