The first in a series of goodbye games for the great man brought some glorious sunshine to North London. Hopes were high for exceptional entertainment, though the news that Auba wasn’t starting brought the mood down a notch. I suppose the hope was to further cement some combinations for Thursday’s semi, so it was understandable in that sense. 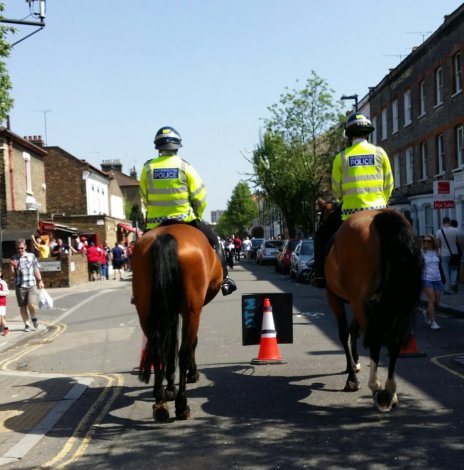 West Ham supposedly dominated the first half according to some of the media. Apart from a ball bouncing off a Hammers’ player’s shoulder on to the top of the bar and a fairly routine save from Ospina from a shot on the break, West Ham barely had an effort on goal.

For the boys in red and white, Kos saw his decent header go just wide and Danny had two efforts showing the full spectrum of his abilities, one top quality and the other an awful scuffer. Elneny rolled his ankle (hopefully with no serious damage) but not much happened apart from that and our hopes were high that the second period would see an improvement.

Not a day for fair-skinned celtic chaps 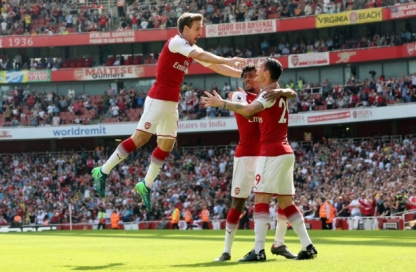 The second period burst into life with Nacho’s sweet volley off his shin from Granit’s corner five minutes after the break. Failing to build on this lead, Ospina then punched out a crossed ball South American style straight back to the Hammers and with the defence in complete disarray, the hideous Arnautovic crashed in a well-struck drive. 1-1, quelle surprise.

Time for the cavalry, Auba for Alex Iwobi and the world suddenly seemed an even brighter place. Hart made fine saves from Xhaka and from a peach of a curler from Welbz, before a beautifully floated cross from Rambo sneaked past a hesitant Hammers defender and into the far corner for the goal that finally broke United’s flagging resistance.

The third came after a fine passing sequence and ricocheted off the underside of a West Ham defender’s legs, fooling Hart at the near post. Effective strikers often seem to get that sort of break and Laca is proving to be very effective indeed. Get your shot off and things happen.

My favourite goal of the four was the last one because of Ramsey’s exquisite feet in rounding a bemused Zabaleta which had followed a jinking turn from Auba. Hart got a hand to Lacazette’s shot on the way in, which sort of summed up his day.

Ospina – Fairly untroubled, had little chance with the equaliser … 6

Bellerin – Appalling effort ballooned over the bar in the first half, defended ok  … 6

Kos – Hopefully now match sharp for Thursday, led from the front as usual  … 7

Xhaka – Granit always oozes class against opposition of this standard, perhaps he can kick on and raise himself up to this level in all games next season  … 7

Ramsey – Class personified, always trying something to remove the wheel clamp from the bus   … 7

Iwobi – Sometimes Alex’s pitter patter feet seem to be an outward manifestation of his agitated, hesitant mind – this was one of those days  … 5

Maitland-Niles – Time for a bit of canvassing in the acres of space in midfield, but difficult to recognise with his new trim … 6

On to Thursday with that last ten minutes giving us a welcome boost of confidence and optimism.

This entry was posted on Monday, April 23rd, 2018 at 9:13 am and is filed under Uncategorized. You can follow any responses to this entry through the RSS 2.0 feed. You can leave a response, or trackback from your own site.

72 Responses to Fun in the Sun – West Ham Ratings