Be Careful What You Wish For

Today we have another guest post from West Ham Bob, a man with considerable knowledge about the great game but who, through no fault of his own, supports today’s opposition…

Six weeks ago, I viewed this game with a great deal of fear. However thanks to the appalling form of Southampton and Stoke (wouldn’t it be brilliant if Mark Hughes took both clubs down in one season?) we reach this point with very little for either side to play for.

In some respects both our clubs have been experiencing a great deal of turmoil. Yours over the future of Arsene Wenger and the failure of your board to run a coherent transfer and team investment policy and ours over the total and utter mismanagement of our club, by three complete imbeciles. 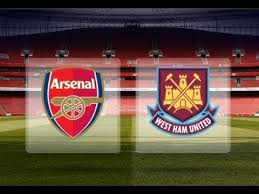 This season has seen a significant worsening of relations between some of our fan base and the board, which culminated in the scenes witnessed at the Burnley game. The lead up to that moment would take me many pages of script to explain, however suffice to say, it was a total and utter failure to provide investment to the team, together with a string of outright lies and incompetence over so many aspects of the move and life at the soulless bowl.

Whilst as a vfan base we are divided on much of this (some actually like the stadium and think the owners saved us from oblivion 9 years ago) the one thing that unites us is Karren F’ing Brady. For it was her job to manage the transition to the Olympic stadium and she negotiated what has turned out to be a truly appalling contract for all concerned. Interestingly for someone who bills themselves as the country’s pre-eminent female entrepreneur, she’s never actually launched a single company in her life!

Her list of crimes and lies is very very long and includes giving up all control on match day stewarding, food and beverage, the ability to West Hamify the stadium, the tedious walk to the ground, mixing would be sitters and standers leading to countless fights, insulting Leicester’s owners in her high quality Saturday article in the currant bun which has lead to them refusing to carry out transfer business with us and the list goes on and on.

But perhaps her biggest crime was her sickening attempt to pitch fan vs fan during the build up to a protest march which seemed to have gained significant support. Through a series of lame promises and outright bribes (don’t march and we will donate monies to a young girl suffering from cancer) she managed to get the protest called off and in the process set the seeds for what occurred at the Burnley game.

And then there is the sale of the ground. Originally sold to Galliard Homes for 38 million and then the day after our last game, sold on by Galliard to Barratt Homes for 80 million and surprise surprise, no one can quite work out why and where exactly that 42 million went!!

And it’s now been 16 months since I went to the soulless bowl. You see I decided that the only true form of protest was to boycott the games and refuse to give these three shysters any of my money. And interestingly, it appears from the outside that this is exactly the tactic that has seen this weeks change at Arsenal as match day attendances have plummeted. And I am more convinced than ever that it is the only effective form of protest available to us fans.

So to today’s game. Whilst we are still mathematically in the relegation shake up, Moyes will view a point as gold dust so expect 10 behind the ball and a very moody Marko up top getting more and more frustrated as the game goes on. Keep an eye out for Declan Rice, future Republic of Ireland captain, and a real class act at centre back and if you sit in the first couple of rows on either side, take a poncho as Arthur Masuaku will be gobbing his way down the wing. Our last away game was a 1-1 draw with Chelski, but I think the Arsene effect will be on parade and I expect you boys to win by 3.

Finally some thoughts about your managerial vacancy. My sincere hope is Alan ‘chocolate’ Pardew gets the job but I think that’s a little bit of a long shot! 20 odd years ago Arsenal brought in an unknown manager who turned out to be pretty good so why not go for something similar. Graham Potter at Ostersund is about to be out of a job (turns out his Chairman has been a very naughty little boy) and he has that team playing a great brand of football.

This entry was posted on Sunday, April 22nd, 2018 at 9:46 am and is filed under Uncategorized. You can follow any responses to this entry through the RSS 2.0 feed. You can leave a response, or trackback from your own site.

87 Responses to Be Careful What You Wish For