Had an idea for a mini series of posts

While the great hopes of English International Football snuggle up for two weeks, we’re left in the void, picking our noses and scratching our arses. Bloody awful situation.

Things at Arsenal are looking considerably brighter than at the onset of the last ghastly international break, and frankly, while Arsene continues to pick the right players, in the right positions, and we continue winning, there’s bugger all to moan about, so I’m afraid we’re treading water until we play Watford.

Let’s start with No.1 from above and see how we get on. I use the term “major trophy” and by that I’d say League, FA Cup or a European thingy.

Some of you can be really quite nit-picky and will talk about squad members who don’t really play but get medals and shit like that, so if that’s your bag, then fine. The detail is not my thing.

(Before we start I realize that Burnley is currently in sixth position on goal difference but this post is about the most likely top six at the end of the next six games).

Here is each team’s schedule of the next six games plus their current standings.

Man C has the easiest looking games as they only play 1 other top 6 team – Arsenal at home.

Man U’s run of 7 easy games is over and they face Liverpool, Tottenham and Chelsea in the next 6. 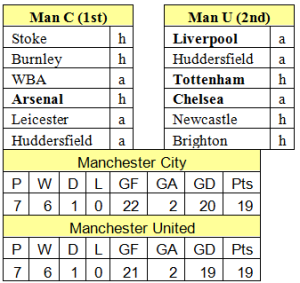 Tottenham play 3 top 6 teams Liverpool at home and Manu and Arsenal away.

Chelsea play Man U at home and Liverpool away.

This could be a great opportunity for Arsenal to move up the table but their 2 games against the top 6 look tough.

Liverpool could drop out of the top 6 as they are vulnerable on defence and play 3 high scoring top 6 teams.

My question to you is in what order do you see the teams after the next 6 games?

The Seagulls fly into The Emirates

Brighton & Hove Albion F.C. were founded in 1901 and started playing in the Southern League where they won the 1910 FA Charity Shield, which at that time was contested by the champions of the Southern League, and the Football League Champions.

The 1910 FA Charity Shield was the third Charity Shield. The match was played on 5 September 1910 between 1909–10 Football League winners Aston Villa and 1909–10 Southern League champions Brighton and Hove Albion. The match was played at Stamford Bridge, London, and ended with a 1–0 win for Brighton and Hove Albion. The goal was scored by Charlie Webb, an amateur, with 18 minutes of play remaining.

Poor management brought them close to relegation from the Football League to the Conference which they narrowly avoided in 1997 and 1998. A takeover saved them from liquidation, and following successive promotions they returned to the second tier of English football in 2002, from then on playing in the second and third tiers of English football until the conclusion of the 2016–17 season, where the club earned promotion to the Premier League for the first time in their history, marking an end to a 34-year absence from the top flight.

In December 2008 – after 12 seasons without a permanent home the building of their current home The Falmer Stadium started. On 31 May 2011 the club officially completed the handover and was given the keys to the stadium with an initial capacity of 22,374 seats, which has since been increased to 30,750. They are nicknamed The Seagulls or simply Albion.

We have only played 8 league games against Albion, all in Division 1.

Here is our record. 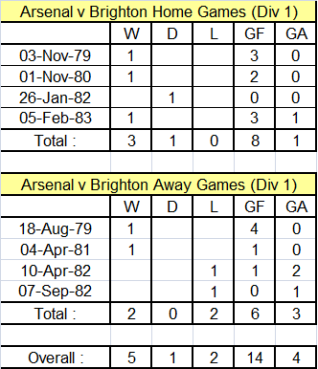 I cannot see anything but a victory for the good guys regardless of our team, it seems that Koscielny is doubtful and Ozil, Coquelin & Welbeck are out and many of the viable alternatives played in Belarus on Thursday – so it’s a real guessing game – but here is my stab in the dark.

Keep the FAITH – we will win.