Santi Cazorla – Out For The Season

Arsenal midfielder Santi Cazorla will miss the rest of the season with an ankle injury.

Cazorla has been out since limping out of the Champions League group stage game against Ludogorets at the Emirates Stadium in October.

He underwent surgery in December and Gunners boss Arsene Wenger hoped the 32-year-old would be back before the end of the season.

But Spain international Cazorla is now focusing on being fit for next season.

This news from BBC Sports makes me wonder if Arsenal would have been more capable of challenging for trophies if he Santi had not been injured. In my opinion he is the type of player that definitely makes a difference and he has been sorely missed. Our midfield has been one of the keys to our success and without him it has not been nearly as efficient or effective.

I also wonder if after close to a year off he will return as the same player who left, we may well have seen the last of Santi at his brilliant best – but I hope I’m wrong.

What are your thoughts –

Would we have been able to achieve more with him playing this season?

Do you think he will be as effective next season?

We all love Santi. Even other clubs fans love the little Spaniard. Plays with a smile, incredibly talented, famously two-footed, a tough tackler for a diminutive chap. He is the player around whom Mr Wenger could and should have built his team – the natural successor to Fabregas.

But Mr Wenger couldn’t and didn’t. Instead he signed Xhaka and Elneny, neither of whom has the skill sets of Cazorla. Why? Because as much as Cazorla is a wonderful player, he is fragile and even worse, ageing and fragile.

Yesterday we got the news that Cazorla is out for the season having played his last game in October. He managed just 11 games this season and only 21 the season before. Prior to that he was averaging  well over 40 games per season. At the ripe old age of 32, things are not going to get better even if Santi devotes the next 5 months to getting fit for next season.

Would you give him a new contract? Should AFC pay him a few million to sit in the stands and train a bit?

No doubt, Santi brings huge benefits to off-field squad cohesion and well-being. He is universally loved. Furthermore, his influence and instruction to the youth players must be a massive boon for all concerned. But is that enough? 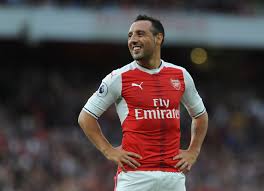 We have seen today, with the sacking of Ranieri, that there is no sentiment in football, if you are not performing the exit door awaits. It is not Cazorla’s fault that he is injury-prone but neither is it AFC’s.

In my opinion Santi is worth another year or two (we kept Diaby & Arteta) if only for his wonderful spirit, however, from a purely pragmatic point of view, Arsenal are likely to see a diminishing return on their investment into Cazorla.

The Metro states that Cazorla signed a new one year contract in December 2016, but this is not confirmed by the club (as far as I can find out). It is not my money and the opportunity to see the Spanish Magician in an Arsenal shirt is an appealing prospect, but if it were my money I may think differently.

This entry was posted on Friday, February 24th, 2017 at 9:14 am and is filed under Uncategorized. You can follow any responses to this entry through the RSS 2.0 feed. You can leave a response, or trackback from your own site.

167 Responses to Santi Cazorla – Out For The Season