The reason for writing this post is the upcoming 90th birthday of one John Alfred Churchill who has been going up the Arsenal with the Vines family for upwards of 25 odd years. He’s been attending games for a lot longer than that, obviously, but it’s only in the last few decades that he really established himself as part of the family.

The ‘oldest fan’ crack stemmed from a Champions League game against AZ Alkmaar in 2009 when John was a meagre 84 or thereabouts. Our habit in those days was to buy a few cans and sit on the wall alongside the Drayton (the away fans pub), just the other side of the South bridge at the Emirates Stadium. Some Dutch fans stopped to chat on that occasion and remarked on JC’s age, saying that most football attendees in Holland were aged between 20 and 40 and they’d never seen anyone as old as JC at a game. We tried to convince them that John was 104 years old and in their inebriated states were of half a mind to believe us. The next summer I sent John the card below for his birthday; a card he proudly took to his local chippy in a vain attempt to hoodwink them into believing he’d had cards from Her Madge.

Anyway, to get back to Mr Churchill, he was born on the 1st July 1925. Often’s been the time when he’s said that he’s not slept much the previous night due to guilty feelings over the stress and worry he caused his parents as a young lad. On one particular occasion, he hitched a ride in a lorry from London all the way up to Liverpool in the hope of blagging his way on to a ship. The police stopped his escape plan and sent him back to London after informing his parents he was safe and sound.

As a schoolboy, he played on the hallowed Highbury turf during an Islington schools final. His tale from this momentous occasion was that he played left wing, scored a goal but finished on the losing side, the score being 1-0. The punchline to this story is that he scored an own goal from a corner!

His desire to sail the seven seas led him to lie about his age and gain access to a seaworthy position in the Merchant Navy in the early 1940s during the Second World War. He became a gunner, learning how to fire the on-board defensive guns. His time with the Merchant Navy saw him through to the end of the conflict and left him with some shrapnel in his leg which still gives him some problems (when he remembers it’s still there)!

JC’s walking speed has never been that prodigious at the best of times but, for some unknown reason, always improves when he’s walking with a young lady. So we’ve been very happy when in need of a swift walk from the pub to get into the ground before kick-off if the said young lady has been part of our pre-match festivities! 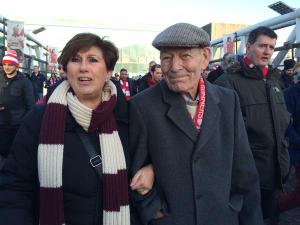 Since I found the marvellous blog which is Arsenal Arsenal, many bloggers have met JC and all have commented on what a wonderful chap the old boy is. My ulterior motive in compiling this post is to get some of you to send him a card for his 90th birthday. I’d love it if he received a few cards from regulars on the blog from all over the country and maybe a couple from overseas, too; more of that later.

After the war JC joined the Civil Service and met my old man and they developed a lifelong friendship from there onwards. When clearing out my Dad’s house we found diary entries about their relationship from way back (fifties, I think), such as ‘JC says he’ll give up smoking if the cost of them goes up anymore’. As a matter of record he gave up about 3 years ago after many failed attempts. One time he tried to convince us that his doctor had advised him to start smoking again because he’d become such a bag of nerves!

My Dad used to have two seats in Block Z of the West Stand Highbury and JC was on his regular list of colleagues and friends he’d invite along to watch a game. The seat alongside my Dad’s two became available in the early 90s. JC was informed, bought the season ticket and thereafter, a regular feature of Saturdays, was JC turning up in his Volvo estate to ferry them both towards Islington.

Back to more recent times, JC’s love of going to the football is less in the actual game itself, but more in all of the familiar faces he sees at home games. He often approaches stewards and policemen/policewomen, touches their lapel and when they look down, brings his hand up to clonk them on the nose. Many of the stewards don’t get caught more than once but they all seem to enjoy the interaction as much as he does.

As I said before, our custom used to be to walk over the South Bridge to the ground, largely because my old man needed to be pushed in a wheelchair to get him to his seat. Passing the burger van on the corner of Aubert Park and Drayton Park, JC often stopped to shout out ‘Buy one, get one free’ or some such nonsense. The boisterous chap behind the counter developed quite an affection for JC after a time, always addressing him as “Colonel” and making cracks about Douglas Bader and other non-PC type jokes.

John has shown little sign of giving up attending games, though he tends to steer clear of evening kick-offs these days, preferring Saturday 3 o’clocks (as most of us do). We will continue to pick him up and take him to The Arsenal for as long as he so desires.

Long may it continue.

Back to my request for birthday cards……if you do receive a request via email to send the old boy a card to commemorate his 90th milestone, I’d be eternally grateful if you could post him something to brighten up his day.

This entry was posted on Sunday, June 21st, 2015 at 10:04 am and is filed under Uncategorized. You can follow any responses to this entry through the RSS 2.0 feed. You can leave a response, or trackback from your own site.