Look at the back page of yesterday’s Sun. Irresponsible, rabble-rousing and quite frankly hugely depressing evidence of stupidity of both the Sun and the Orcs. 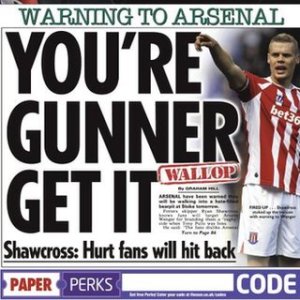 If there is any truth in this foul discourse from the miscreant Shawcross then he has to be hit with a disrepute charge. It is rabble rousing at it’s worst and sets the agenda for the game.

Is there anywhere else on earth where the perpetrator becomes the victim? It makes my blood boil – which is exactly what the Sun is promoting 😦

As to the football – it becomes secondary; what will be the MotD focus? A lovely pass from Alexis or a vicious foul by an Orc or god forbid, one of our upstanding gentleman?

On the site this morning (amongst all the marvellous music and banter) someone said they would be happy to escape with a point and no injuries. I agree. Over and above the physical demands of playing the biggest team in world football in their own stinking cesspit we are up against a team who are playing well. Stoke were very unfortunate at Old Trafford where only a wonder save and an open-goal miss stopped them taking the points (can anyone who doesn’t believe in luck explain MU’s eternal good fortune?) and should have won at Anfield.

They have injuries, – so do we. We have intelligent, fast midfielders and forwards – they have Orcs moulded in factories in Kazakstan. They have a manager whose idea of a book is a yellow piece of cardboard – ours has the complete works of Proust in his office.

We have won only one of our last eight games at Stoke.

Onto other stuff. What do people eat in Stoke? My first thoughts ran along the lines of Orcs don’t need to eat but further research shows that even Devilspawn have to feed!  And to fill their flabby, white, ugly faces they turn to cholesterol fuelled foods  – Triple Big Macs and double fries, cream-filled doughnuts, twice-fried fish,  stray-dog curries, and the Orc favourite, Shawcross Pie (minced offal in suet). Washed down by a quart of Devil’s scrumpy.

Football is tribal, it is what I love about it. Even when watching games in the park I pick a side  – I bet you do as well. It is us against them but above all else it is a Sport. and sport must be played within the realms of “sporting conduct”. When imbeciles like Sun writers and Shawcross reduce our sport to the level in yesterday’s back page are allowed to go unpunished is further evidence that the sport I have loved all my life is being destroyed by money, greed and stupidity.

This entry was posted on Friday, December 5th, 2014 at 11:33 am and is filed under Uncategorized. You can follow any responses to this entry through the RSS 2.0 feed. You can leave a response, or trackback from your own site.