Is Giroud Plan A or Plan B?

I am sure it can’t be easy trying to motivate and improve an average CF year on year and yet that seems to be exactly what Wenger is doing with Olivier Giroud.

If the plan was to challenge Giroud ‘to up his game’ by playing Sanogo ahead of him against Palace then there is a strong case to say that it worked. There is little doubt that his inclusion changed the momentum in our favour that enabled us to finally secure the three points.

If the same plan was to motivate Giroud by playing Alexis Sanchez ahead of him as the number 9 against Everton then in view of the fact that we were two down at half time and we came back to nick a draw then it has to be said that it worked.

It seemed as soon as Giroud took to the field everyone knew what to do again. Ramsey could run forward confident in the knowledge that Giroud would be able to hold the ball long enough before laying it off to the on coming Welshman, Wilshere could try and re-enact his goal against Norwich last season and both Debuchy and Monreal could send in those all so familiar high crosses for the tall Frenchman to get on the end of.

The argument for Giroud to start as our plan A centre forward is strong and with him up front I see no reason we can’t replicate last season and finish fourth.

Fourth, fourth is that what you want?

Wenger didn’t buy Sanchez because he was happy with the way things were, he obviously bought the Chilean because he thought that he would improve things and I still believe he will. 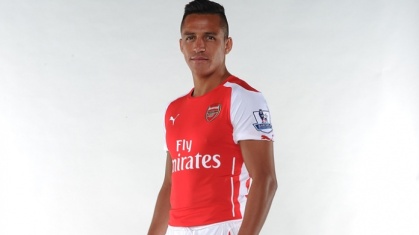 I have been surprised by some of the contributors on the site who seem to have written him off after only 45 minutes as someone capable of leading the line and call for the signing of a new striker. Do these same people expect that someone like Cavanni would have slotted into a new team and a new system so seamlessly that he would have scored a hat trick against Everton? Maybe they do?

I stand by my player ratings and especially the 9 I awarded Sanchez. By way of explanation, I ask you to do a mental player rating of everyone in the first half excluding the back 5

Flamini: OK but nothing special 5
Ramsey: constantly gave the ball away 4
Wilshere: looked a bit stronger (I’m trying here) but did nothing of merit 4
Ozil: no where near match fit, continually lost the ball and never made a telling pass. 4
Oxlaide-Chamberlain: poor control, poor passing, missed open goal. 4

So with the players around Sanchez playing like a bunch of blokes on Hackney Marshes what real chance did the Chilean have? And yet, his control was excellent his tracking back was superb, he made some important tackles and all in all I thought he looked good. OK there is still a lot for him to get used to but I remind myself that Robin Van Persie was not converted into a CF overnight.

If we want to improve then we have got to change things. Wenger tried a new system and I for one am very glad of it, maybe he could have waited until Leicester but there are no guarantees that it would have been more effective against them than Everton.

Giroud isn’t plan A or plan B neither is Sanchez; they both have different skills that can be deployed against teams that best suit them.

Who should start up front against Besiktas on Wednesday?

This entry was posted on Monday, August 25th, 2014 at 9:43 am and is filed under Uncategorized. You can follow any responses to this entry through the RSS 2.0 feed. You can leave a response, or trackback from your own site.

132 Responses to Is Giroud Plan A or Plan B?