With the excitement of next week and fourth place in the bag would you be upset if Mr Wenger played the U-21 side? It is true the three points are handy and will give us our best points tally since 2007 but that doesn’t give us a trophy does it?

Which would be worse, getting beaten or losing RamZil for the final?

For Mr Wenger it is a damned if he does and damned if he doesn’t situation. If he plays a full first team and anyone gets knacked then the press and fans will question his choices, but if  he chooses reserves and we lose, the same people will talk about loss of confidence and lack of respect.

It is a game when 3 subs are simply not enough. The ideal situation would be similar to an England friendly – start with the experimental side for the first 60 mins and then bring on 7 first teamers for a runabout.

Norwich: Doomed to play Championship football unless they can beat us by 17 goals and WBA lose. Anyone think this is likely? Norwich are one of the few teams that almost everyone likes – well, maybe not like , let’s try not many people dislike. It will be sad to see them go. 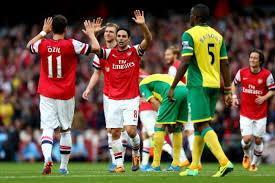 Neil Adams seems a likeable enough chap. Was it the right decision to sack Hughton? Of course it was, he is tainted. Name me one ex-Spurs man who has done well in club management (and before you start, Alf Ramsey is the exception not the rule).

Will Adams keep his job next season?  Who could have predicted that Sunderland would have garnered 13 points from their last 5 games having taken Nul Point (said in a french accent following last night’s Eurovision) from the previous 5? Had this not happened Adams would have kept Norwich up but I feel like his team Adams is doomed.( BTW, where else can one use the word “garnered”? Can one garner some potatoes?)

Norwich are going down because they cannot score. Defensively they are sound, having conceded just 16 goals at home this season which is 4th best in the PL. Both City and Everton have dropped points at Carrow Rd.

Arsenal: As this game will not impact at all upon our season, will this result in the handbrake being released? I expect Norwich to go down fighting which means our players will have to play with the intensity required to win any PL game.

There is hardly any chance Mr Wenger will start this midfield but I would like him to. If Diaby is fit enough for the bench then he is fit enough to start. Wilshire and Ramsey to get a 30 minute cameo and OG 5 minutes at the end.  Job done.

This team has enough to beat Norwich though it requires Sanogo to finally get on the scoresheet. Have a blinder today and Mr Wenger could save €40m on a striker in summer – he obviously rates the young Frenchman but until he turns potential into goals there must be question marks.

Norwich: The town has an interesting history. Originally settled by the Iceni tribe  (of whom Boudicea was a leader). They did not take kindly to the Roman arrival and the Italians gave them a proper spanking before making the area the capital of East Anglia. They left around 450 A.D. along with all their fancy dan Roman friends and the land was taken over by the Anglo-Saxons who named it Norwic. Then those pesky Vikings under Swein Forkbeard arrived (whom we met a few weeks ago on our trip to Cardiff) and razed the city before settling there (not the best introduction to the locals!!). Norwich grew and it was mentioned in the Domesday book (1086) that 98 houses were demolished to make way for Norwich Castle. Norwich Cathedral was built not long after. 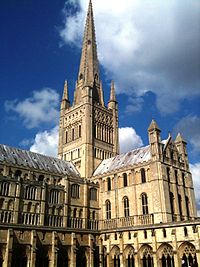 Henry 2 and Richard the Lionheart both gave the city it’s charter and Norwich became the only English city ever excommunicated by the Pope! By this time it was the second largest city in England. It remains a lovely, historic city with some highly recommended tea shops!

So ….. last League pre-match of the season and probably one of the hardest to write. What is there interesting to say about a dead rubber?

My hope is for an entertaining game, a win for the good guys and an injury free end to the season

This entry was posted on Sunday, May 11th, 2014 at 9:59 am and is filed under Uncategorized. You can follow any responses to this entry through the RSS 2.0 feed. You can leave a response, or trackback from your own site.