Team up for it, crowd up for it, great day in the Red and White side of North London. Grown men singing Sweet Caroline at the tops of their voices as they left the ground – Good times never seemed so good – and Neil Diamond was not wrong.

Cech: his maturity counts for a lot, solid as ever and a great save at the end to keep an impressive clean sheet. 8

Bellerin: excellent going forward, always there to offer an outlet on the wing, some decent defending and some down right worrying defending towards the end. 7

Mustafi: there was a reason why the defense worked today rather than not on other occasions and that was because of the return of Shkodran. A general in his organisation and a tower of strength to the other defenders around him and if that isn’t praise enough he set us on our way to the fine weekend that we are having now with a brilliantly headed goal, my motm: 10 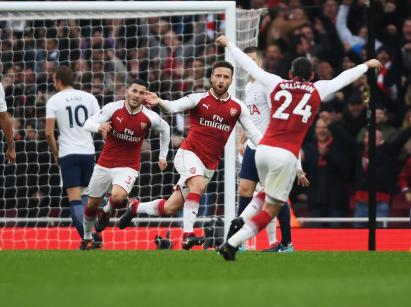 Koscielny: seemed to be inspired and lifted by his fellow CB, some superb defending and some down right poor passing in the first half. Maybe this is harsh as the noticeable thing was that he was the only player who was looking for the Lacazette runs, I noticed in the week that the French national team understand our number 9’s runs and know how to find him, they are still working this out at THOF. 7

Monreal: a very calm, sensible performance nothing fancy nothing silly just went about his job in his professional way. 7

Kolasinac: the honey moon period is over now and there is a touch of the Emperor’s new clothes going on here, don’t get me wrong I am as pleased as punch with the Oxlaide-Chamberlain upgrade but I am still struggling to see exactly what he brings to the table and is what he brings enough? That said if you play in a team that beats spuds 2-0 you will always be worthy of praise and so should his compact, no frills performance today. 7

Ramsey: probably the player that raised his game the least today and as for playing in trainers for most of it, sliding all over the place and loosing possession cheaply, that was not good; he finally changed his boots and got a bit more to grips with things. 7

Xhaka: this player always worries me as it always only seems like a matter of time until he gets sent off — but he didn’t today, I am not known to be the biggest Wilshere fan but I would have Jack in that team ahead of him everyday of the week. Granit sprayed the ball around well and clearly has a lot of self belief which is a useful asset. 7

Ozil: here’s a question, were you a Bergkamp fan or an Henry fan? If you were like me a Berkamp fan and are of a certain age then there is a linage that you have followed: you loved Liam Brady, you secretly admired Paul Davis more than Rocastle, you liked Merson, you thought and think that Bergkamp was and is the greatest player you have ever seen in an Arsenal shirt and you were a great admirer of Pires and yes you still have a soft spot for Fabrigas. Why all this? Because they are all a similar type of player and can be traced through the decades; the more skillful type rather than the pure goal scorer and as such, you, like me, love Ozil more than any other player at the club. We’ve got Ozil, Mesut Ozil, I just don’t think you understand. 9

Lacazette: he is getting close isn’t he, you can sense that there is so much more from him to come but it is coming isn’t it. Interesting that Wenger remains cautious wit him, only ever playing him for 70 minutes. I suspect Wenger knows the levels of fatigue that the Christmas calendar has on players and wants to make sure he is still standing in the new year. Good day today. 9

Sanchez: another brilliant performance, committed as ever and Johnny on the spot again to fire home our second. 9 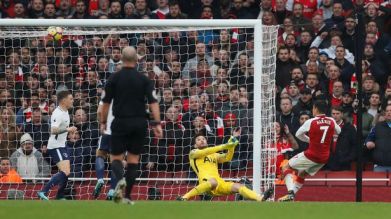 Match thoughts from a jubilant LB