Who would have thought that Ipswich at home would be our most important game of the season to date? Some may say that beating Chelsea and overcoming our Big 4 hoodoo was vital but a loss tonight is unthinkable, especially for Mr. Wenger.

Ipswich were superb at Portman Rd. They deserved to win and but for a fine Chesney save could have won by more. It wasn’t that Arsenal were poor, more that Ipswich came out with a gameplan which they applied with great determination and skill, and Arsenal didn’t have the cojones to deal with them. One would have thought that our midfield would be quite used to playing against less talented but very dogged opposition, and that AW would have sent out his team fully aware of the dangers of underestimating any opponents.

I highlighted Conor Wickham before the game and he showed why he is so highly rated. I am sure that if one were to check the statistics he would have run twice the distance of Nik B and with far more effectiveness. To see him  – a 17-y-o. – closing down Eboue in the corner and then tracking his run up the pitch was an object lesson to all our players. Hard work reaps benefits.

Ipswich’s central defence was never ruffled nor were their full backs given the grilling one would expect, though to be fair to Nik B and Theo, they didn’t get any decent service from the players around them. Even Cesc had an off day. The side that took the pitch at Portman Rd should have won; it was packed with Internationals (Chesney was the only player without caps) and every player had bags of PL experience – they just didn’t gel. Arshavin and Eboue had stinkers resulting in a very narrow attacking area and no cutting edge.

The old adage “form is temporary, class is permanent” is apt for Arshavin this season. He WILL come good and looked to be determined to work his way back to form last time out. This applies to Chamakh as well, what has happened to our star striker? Can he regain his blistering early season form? Will AW play them, particularly in light of the kicking Nasri got at the weekend and Van Persie’s notorious chocolate legs?  It should be pointed out that we have Huddersfield in the Cup on Sunday and can therefore choose when to rest players. 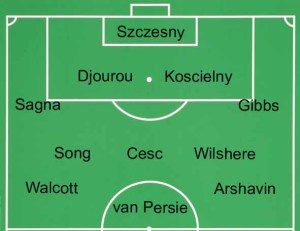 In view of the importance of this game I would start with the A team, though I wouldn’t be surprised to see the famously stubborn AW stick to his principles of playing some members of his B squad.

Tonight Arsenal have to walk onto to the pitch with the correct attitude – losing is not an option.

Connor Wickham: Will he be a Heskey or a Drogba?

Can you feel the tension? Are you moist with excitement? Breathlessly fearful of the possibility of defeat? Come on …. it is Semi-Final day.

These days do not come along as often as they used to – I recall getting Wembley fatigue followed by even worse Cardiff fatigue, but now a Semi-Final is an unusual event. Am I excited? …… mildly. Yes, I want us to win tonight, and yes, I want us to silence the bleating from the media and glory-hunters, but if we do lift this trophy we will hear a chorus of “it is only the Carling/League/Milk Cup”, and if I am honest, if Sp*rs won it, I would say the same.

But a trophy is a trophy and apart from the Emirates Cup we have been through a few lean years. So let’s start the ball rolling with a rousing victory this evening.

We couldn’t have wished for better opponents; a team lying 19th in the Championship, rudderless, having just removed the odious Roy Keane and leaking goals a plenty, Ipswich could be forgiven for concentrating upon league survival and letting this game go. But roared on by a full house of frozen East Anglian’s they will be trying to impress their new manager and give themselves a chance at the Grove.

One Ipswich player I am really looking forward to seeing is Connor Wickham, a young man who has been attracting Premiership attention. I watched him playing for England youth alongside Benik Afobe and he looks a fine player. Huge for his age (or any age!), skillful, pacy and good in the air, Wickham could well be the first choice England striker of the future. Right now though, he is more Bendtner than Eto’o.

It is a puzzle who will start tonight. Squillaci is out meaning a JD and Koscielny centreback pairing. Let us hope nothing happens to either of them! With hindsight it would have been wise to curtail Kyle Bartley’s loan spell at Sheffield; having watched him at the weekend, he appears to have all the attributes necessary for an Arsenal CB; big, strong, comfortable on the ball and what is more, a natural leader. Bartley would certainly have played tonight.

Who would have imagined at the start of the season that we would miss Wilshere in midfield? Yet his absence was felt against Leeds and young Jack has quickly established himself as an integral cog in our team, he is a shoe-in for Young Player of the Year. I hope he starts as our attacking MF tonight allowing him to show his natural offensive flair.

I don’t know how many of you have been to Ipswich, but the ground is a classic, cosy English League stadium, a fine atmosphere will be generated, not least by the travelling Gooners who have been exceptional this season.

I expect us to make it difficult and leave with a one goal victory, setting up a 4 goal hammering for Paul Jewell’s men at the Grove