Unbelievably, I think I have unearthed a quite brilliant observation. Now bear with me, and if someone is reading this to you, I don’t mean “let’s get naked”. 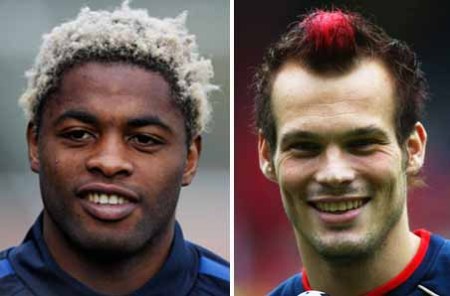 Anyone else noticed improvements in the performances of JD and Alex Song this season. Well, I have, and do you know what, there is a common denominator. Yip, you’ve guessed it.  Dramatic change up top in the head fur department. Let’s look at the evidence. Is JD a better player with some colour up top? Yes he is. Has Song’s game improved since he yellowed up? Yes it has. You may think I am being silly, however I have tested this theory out on a person and it is bulletproof. Let’s continue. Freddie Lljungberg: did his development step up a notch with the addition of the red Mohawk. I believe the answer is: yes, it did. Stevie Bould and hair loss. Would we have celebrated his recession with “Stevie, Stevie Bould, Got no hair, We don’t care” with such relish had the lowering of the hair line not been matched by heightened performances on the green stuff.  I think not. Seaman:  poneytail and tash?  Worked for him.  Marouane arrived with a German styley short top, long back, and bingo in they flew. He has since “normalized” his hair by doing away with the back bit, and guess what? The goals dry up. Cesc: George Michaeling his trimmed beardy look, world beater. Bacary Sagna: arrived at The Arsenal with something on his head. It has remained, and he continues to be the league’s best right back. Change should not be considered.

All of this brings me to the serious point about this post and an area of deep concern that it highlights (highlights! Oh, that is so good). Jack Wilshere, without doubt the most talented Arsenal and Englishman of his era,  is but one small tub of gel away from disaster. There are very many performance enhancing hair creations, however I simply cannot stress the dangers that lie ahead of the gelster. I am not referring to the spikey-up version. There is something way more sinister and I am alluding to the wet look comb forward. This is known as the Cretin Cut. It is the chosen look of the wayward lad. There are great dangers that lurk beneath the mop that dons the gel, and it is evident that the Wilshere hair is, how can I say this, forward looking.

At this point, I want to send out a clear message to Rosicky, Denilson, Eboue and the rest of the untreated, and it is simple: get busy upstairs. I am no stats man but the evidence is overwhelming. “Normalizing the thatch” is a means of compromise, moving into the safe middle ground. Extinguishing the flames and blunting the edge. It is not clever and it is not mature.  We need the extremes for our boys. That’s the extra 5%, or the bit that separates the winners from also-rans.  I appreciate there are many football experts with a far superior knowledge of the technicalities than I, but we all make mistakes, and it is easy with all the tactics nonsense in the modern game to overlook the bleeding obvious.

This post could easily bring in the smallest ever number of comments, and I am happy to take the flak, but do you know what, I am above that kind of thing. Ego must not stand in the way of things that need to be said.  I know this post will give us nothing whatsoever to discuss today, but frankly, I think just for once, some of you should get on with some bloody work!

One of our young gooners has signed up to do the Fun Run for Arsenal’s chosen charity Centrepoint and it would be fantastic if any of you felt you wanted to support her and the charity by donating on her giving page.

The Fun Run will take place at the Emirates stadium on the 19th March 2011. Centrepoint do such good work for homeless young people in London and Arsenal are hoping to raise £500,000 this season to help fund the refurbishment of a facility in Soho.