How many Man Utd players would get into Arsenal’s First Team?

I spend much time discussing football with fans of other teams. Inevitably we play the “but he would never play in our team “game, and this could be the first of “How many Arsenal players would get in  ……… first team”?

Let us look at the current leaders of the PL,  Man Utd, taking what I believe to be Mr Wenger’s first choice 11 v Aaron’s view of the SAF’s first choice.

Not as obvious as one might think. Van de Saar has huge experience and has been a superb keeper. Had AW signed him 5 years ago we could well well won a title or two, but at 40 y.o. his powers are fading and retirement beckons. Whereas our new GK is but a slip of a lad and has a glittering future ahead – he dominates the area, is a fine shot-stopper and is learning quickly.  Experience v Youth?  It has to be the Pole.

Rafael looks major find. Comfortable on the ball, can cross, likes to attack, and can tackle but he has already shown a questionable temperament and has clearly studied tapes of Dani Alves’s cheating  techniques. Sagna is quite simply the best right back in the PL. I would like to see his crossing improve but in every other area he is superb.

Man Utd are truly blessed in this area. Ferdinand and Vidic combine footballing skills and strength. They are both on-field leaders and the rock around which MU function. Arsenal’s first choice CB pairing is unclear, who are they? TV/JD? TV/Kos? Kos/JD?  The JD/Kos pairing seems stable and they combine well but neither is at the level of either of MU’s CB’s

I love Gael, I detest Evra, but my feelings are not based around their footballing ability.  Sadly, Evra is a fine footballer, a winner and very consistent. Gael, as we all know, has lapses, I think he is a better attacking force than Evra but Evra is more solid. I am afraid Evra gets the shirt.

No contest here. When Carrick was at West Ham he looked as though he could develop into the new Bryan Robson – it didn’t happen, whether through lack of ability or injury, we will never know. Either way, he hasn’t the control or vision of Song who at the tender age of 23 is already one of the most influential players in the PL.

Jack’s progress is nothing short of astonishing. At the age of 19 to be the central figure in the England team indicates a truly great player in the making, but Fletcher is the key player in a dull yet effective MU midfield. A terrier and a man who doesn’t accept losing – just the type of player we are lacking at Arsenal. So it is with heavy heart that I take Fletcher, because I believe that with him in the team we would already have won the PL, though I fully accept this is a controversial decision!

Another tough one. Nani has all the tricks, has pace and a fine shot. He also has a very questionable attitude and dreadful hair. Theo has better hair, more pace, less attitude and could be a future Arsenal great. However Nani has 9 goals and 16 assists and is the most effective player in the PL this season, whereas despite having his best season to date Theo has 7 goals, 6 assists. Shame on me but it has to be Nani

This is difficult because they do not play the same roles as MU normally set up as 4-4-2-. If one assumes that Rooney is MU’s playmaker then we have to pit him against our own playmaker,  I could duck the issue and say it depends upon the opposition or shift Rooney out left to be compared with Nasri, but a direct comparison it has to be. Let’s look at this season’s stats – Cesc: 31 apps,  9 goals. 13 assists. Rooney: 29 apps, 9 gls, and 11 assists (?). On these stats Cesc is more slightly effective though both are the talisman of their sides. When either of them plays at the top of their form, their teams win. I love Cesc and this is an Arsenal site so Cesc gets it.

I asked my MU mad friend Aaron who would be SAF’s first 11, and he chose Hernandez ahead of Berbatov. I would pick RvP ahead of either of them. Simply put, our Dutch striker is World Class, a player who can score both the spectacular and elementary goals.

Valencia is a fine player and I expect him to have a major impact on the PL next season, but Nasri is at another level. That Samir became France’s new National Captain last weekend is evidence of his rising stature and reliability. A fine player and with Valencia only just returning from injury, the obvious choice.

Quite how this team would function would be the managers concern though he would have a fantastic bench should the team not perform.

Clearly MU’s defensive steel added to Arsenal’s greater ball control would be a frightening prospect for any opposition and I would expect this side to win the PL, but they would be unlikely to go through a season unbeaten – only a truly great side could do that …. 😉

Finally, today is the 10th anniversary of Rocky’s untimely death. We all loved Rocky, he was a Gooner through and through, a hero to all who watched his development through the youth teams and into the wonderful player he became. My favourite memory of him was his goal at the Lane in the League Cup Semi-Final – one of the most exciting moments of my life. Gone but never forgotten.

The words Old Trafford always brings a shiver down the spine because Man Utd are  the biggest club in football. Perhaps Barca and Real could dispute their crown but MU play in a competitive league which they have dominated for quarter of a century. I always get excited by this fixture, it is one of the glamour games of the year and when both teams are on form almost guarantees an enthralling spectacle – however neither side is on form at present and I fear the worldwide audience will be disappointed if they expect a feast of football akin to the recent Barca v Real game.

Speaking to Arsenal fans at the Emirates and my Goonermates worldwide, there is a strong sense of foreboding – they expect us to lose tonight, which I find perplexing. I know United have only lost 2 points at home this season but we have very good away form. We are scoring freely on the road and MU are trying to incorporate a damaged goods Rooney. We are top of the League and United are not.

The positives for us are the wonderful form of Nasri and the mercurial Arshavin. Should they both play well we can and will win. We need to adopt an aggressive policy from the start and retain ball possession. The defence has to stay solid and be aware thet United do not play route one but attack at speed down the flanks – Clichy will need to be fully concentrated.

There is rumour that Fabianski is injured and that Chesney may start? If true then what better way to start your PL career with a clean sheet at OT?

Then there is the question of Cesc . Should we play him if he is back to fitness? In my opinion he has to start if fully fit, this is not a player who needs to be nursed through with warm up games, he is too important and too good. That said, this is just 3 points in a long season and should he be anything less than 100%  he must be rested, playing a 20 minute cameo should we be losing by a single goal at 70 mins.

The team almost picks itself: 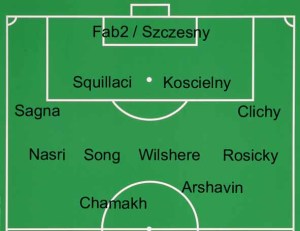 We all know about United, their  problems and strengths are highlighted all over the media.

Tonight’s game is being watched by football fans all over the world, there will be hundreds of millions of viewers and the match will require a strong referee who will neither be influenced by the spite of Sir Alex nor attempt to be the centre of attraction. Tonight’s referee is Howard Webb, who by any standards has had a fantastic year; to ref the 2 biggest games in World football and then be handed the honour of tonight’s game is a huge accolade. He is not a favourite at Old Trafford because (so far) he hasn’t given the expected home decisions. Should he stamp down on Nani and Rooney’s diving plus Fletcher and Scholes savagery, we will have a chance. If not, it could be a long night.

At some point our team has to gel again. We have played wonderful football at times this season and the dreaded November has passed – we can and will win this game unless Lady Luck fortunes Man Utd (as usual!).