Loopy Lovren to do a Kolo?

Liverpool at home is always an exciting prospect and the first home night game makes it even more so. Wish I was going 😦

Plus this is a big test against a team who have spent almost €200m in two seasons! Selling your best players doesn’t help but Rodgers has to prove his success of two seasons ago was not purely a result of having a brilliant striker in the form of his life.

AW has been there; selling your best players inevitably has an effect, fortunately the past two seasons has seen us keep our players and add to the quality of the squad – who knows who will be arriving at AFC over the next 7 days!

So …. Liverpool. Never liked them. Hate the awful dirge of YNWA. I think I would even go so far as to say it is worse than Yellow Submarine! Just think of the dorks who have worn their shirt…. Keegan, Owen, P.Thompson, Dalgleish, One Minute, Emlyn Hughes, Suarez – the list is endless … but they are a very good team when in full flow, always have been.

The question is, has Rodgers put together a winning team? The lack of a quality finisher (in the absence of Sturridge) hurt L’pool last season and the signing of the excellent Benteke gives them considerable attacking strength. Add in the wily Firmino and the excellent Coutinho and we can see why L’pool are confident of an improvement on last season’s disappointments.

We smacked them last season when Kolo repaid AW for bringing him to Highbury – I doubt dirty Skrtel or Loopy Lovren will do the same. 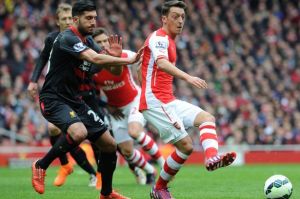 As to us, we have to improve. WHU – terrible, CP good for 45 mins, tonight – who knows? And that is what concerns me; we have the potential to be brilliant and very successful because this is the best squad for a very long time but as yet we continue to be unpredictable. Consistency is what wins titles and can you honestly say you are sure we will play well tonight?

Thankfully we have an almost fully-fit squad (apart from Abou Wilshire and Abou Rosicky). Mr Wenger “just” has to pick his best team. Not easy – my guess is that if we all put in our best 11 that there would be many different 11’s. Theo or Ox? Theo or OG? Ramsey on the flanks? Cazorla alongside Le Coq? Monreal or Gibbs? Czech or Ospina etc etc.

It is being suggested that pace will win this game for Arsenal thanks to L’pool’s static central defence – I agreee and would certainly start with Theo alongside OG in the middle. The problem with this is that it results in the Ox having to ride the pine. The Ox is one my favourite players and he needs to know he has the confidence of AW to be a central cog in this team – he is too good to be a bit-time player.

It should be a good game between two attack-minded teams with Arsenal edging it.