The club have pretty much spelled out that they are putting a lot more emphasis on the development of academy players, and there has been a subsequent staff reshuffle in order to do so. On that basis, I’m going to take a leap of faith and say there will be more players promoted from the Academy than in previous years. It’s obvious that they must have some confidence in what we have currently, in order for them to highlight this approach in their recent PR campaign.

This quote from Raul Sanllehi was widely reported in the press last week.

“Promoting young players from within has always been a key part of Arsenal and what we represent,” Sanllehí says. “We want to continue that tradition for a number of reasons but you could boil it down to two main ones. Firstly, these players grow up with the club and we think having players with this natural bond around what it means to play for Arsenal is good in the dressing room and for the connection with our fans.

“Secondly, despite the huge investment we make into our academy, with rapid inflation in transfer fees it is financially efficient. It’s not about cutting costs or being ‘cheap’, it just means we can then focus funds to make the biggest impact, to get better players when we need to go to the external market.”

Freddie Ljungberg has moved from the Academy into the first team coaching team. He will no doubt continue to have a close bond with some of the stars from last seasons 2nd place finishing U23 squad (pipped by Everton). Along with some returning loan players, we should be able to add serious numbers to the first team.

Personally, I love this. These players coming through are well versed in Emery’s style and the Arsenal way in general. You can pretty much rule out settling issues with these recruits and for the most part they will have a really good understanding of what to expect in the league. I say this with Torreira in mind. It would be a massive shame for him to leave as, judging by the pats on their own backs, the club were quite pleased with the acquisition last summer.

Add the fact that a typical Academy graduate will probably have a lot more loyalty to the club that raised them. Think Bellerin, Wilshire, Ramsey all of whom declared a lot of love for the squad. I believe that we should be looking to embrace this new system as fans, rather than mourn the lack of expensive signings. After all, where has that gotten us of late.

We dipped into the transfer market for ‘Star’ players with the likes of Ozil and Sanchez towards the end of Wenger’s reign and we are still dealing with the financial fall out of that now. I think it’s safe to say we rolled the dice on these guys securing us Champions League football and came up snake eyes. Sanchez moving on and causing issues amongst the squad, and the financial burden of Ozil’s contract forcing us to say goodbye to players such as Ramsey who (probably fairly) believed they should be on a similar wage.

So we have taken a safer route. A path that when things go wrong you have a situation like losing Serge Gnabry. I’d take that over the loss of an established cup winning maestro like Aaron Ramsey. By creating an obvious and realsitic path for young players to make it into a premiership 11 that challenge for champions league football we will surely become a desired destination for elite youth players once again.

For me this is the right time to do it. There are teams in Europe that have provided first team players from their academies. Athletico Bilbao and Ajax on a consistent basis. Ajax have had some serious success that have raised their profile. If we follow in their footsteps and look to actually promote players and give them game time, the baying mob that is our fan base may be open to the prospect. 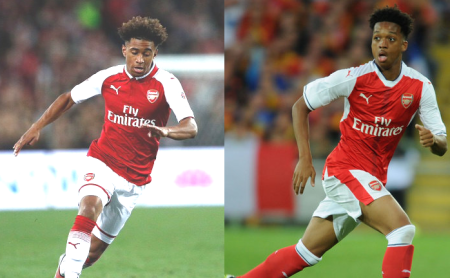 For me the fact that we played Elneny only a handful of times last season creates a bar for players to reach. Surely having his space taken up by a Chris Willock or Reiss Nelson would be preferable?

I am hoping to see a good few of our loaned out players make up vacant places next season, with a lower wage bill and less transfer activity needed from this point forwards. Hopefully the transfer money we do spend, can go on established winners that will provide guidance on and off the pitch.

Which academy players do you think deserve their chance next season?

This is a 24 minute interview with Vinai Venkatesham & Raul Sanllehi if you’ve got the stamina to watch it …  https://www.youtube.com/watch?v=bs5KfWVp4kU