Welcome to the 1970/71 season, after 18 seasons in the trophy wilderness Arsenal finally broke their duck and won a trophy – the Inter City fairs Cup in 1970. That was the end of an extremely miserable period for us Arsenal supporters and gave us hope for the next season. The last time we won the FA Cup was in 1950 and our last League Championship victory was in the 1952/53 season.

The 1970-71 season started with two wins, three draws and one loss in the opening six matches. This included the visits of Manchester United and  Leeds United to Highbury, as well as visiting the previous season’s FA Cup winners, Chelsea, and League Champions, Everton. We also visited West Ham at Upton Park and hosted Huddersfield at Highbury. To emerge from those six games with a solitary defeat – at Stamford Bridge was impressive and built a solid foundation for the season ahead.

Game seven was played before a crowd of 48,713 at Highbury where a double from George Armstrong gave Arsenal victory over Tottenham in the first north London derby of the season. After such a bright start Arsenal looked to be out of the title chase after a 5–0 away loss to Stoke in September. However we recovered and put in a strong run and did not lose again in the league until Januar, and as the season progressed we became involved in a tight race with Leeds United.  After losing away to Derby County on April 26th we went on a run of nine consecutive victories conceeding only a single goal before ending the winning run with a 2-2 draw with West Brom.

With three games left we travelled to Elland Road to face Leeds United. The game was decided in a very controversial manner – in extra time Leeds struck with a quick central attack, Billy Bremner passed to the tall long-legged Jack Charlton, who was adding his weight to the final attack. At that moment the Leeds centre-half looked a clear two or three yards offside as Bob Wilson came out at him. His shot hit the foot of the post, came back at him and rebounded into the Arsenal net for victory.

The official version (the Leeds official version), was that the ball had touched McNab before it crossed the line, which made it a good goal. For this to have happened to Arsenal in injury time was hard enough to bear but for it to happen with a goal which none of them believed was legitimate made it unbearable.

In our penultimate game of the season we beat Stoke 1-0 at Highbury. Of all places to go for the final game of the season on Monday May 3rd 1971, we had to travel to White Hart Lane. Arsenal knew that they needed either to win or secure a scoreless draw to bring the title back to Highbury for the first time since 1953. A score draw would not do as Leeds United was waiting – hoping for an Arsenal slip-up.

51,192 fans managed to squeeze into White Hart Lane with thousands of fans outside hoping to get in; Spurs were desperate to deny Arsenal the bragging rights in North London. It was a difficult situation to be in for the Gunners as oddly enough if they scored, they still couldn’t concede for as I mentioned above, a score draw would have shattered Arsenal’s dreams. A Spurs goal at any stage was most unwelcome. Tottenham goalkeeper Pat Jennings was in splendid form and made many fine saves throughout as Arsenal tried to break the deadlock.

Finally in the 88th minute Ray Kennedy headed in a George Armstrong cross via the underside of the bar. After the goal Tottenham put Arsenal under relentless pressure in the hope of preventing them from winning the title. A Tottenham goal would have been enough for Leeds to win the title, but there was limited time left for them to score. In the end Arsenal prevailed. Bob Wilson prevented any Spurs equaliser from happening and Arsenal sealed the first half of the Double by winning the league in front of Tottenham supporters at White Hart Lane, much to the delight of our ecstatic fans. 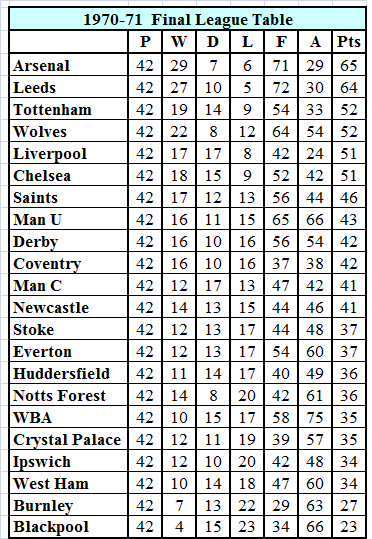 Next up was the FA Cup Final at Wembley on Saturday May 8th, 1971 – it turned out to be a classic encounter with Liverpool in front of a crowd of 100,000 frenzied supporters.

In the previous rounds Arsenal had been drawn away in every round and in the semi-final trailed Stoke City 2-0 before equalising with a very controversial last minute penalty. This forced a replay at Villa Park four days later, a game Arsenal won 2-0 with goals from George Graham and Ray Kennedy.

Now to the small matter of the most important game in our history- The FA Cup Final.

A victory over Liverpool would give us our 1st League and Cup double. Arsenal wore their away strip of yellow shirt and blue shorts. Arsenal eventually won 2–1 after extra time, with all three goals coming in the added half hour. Steve Heighway opened the scoring for Liverpool with a low drive past Bob Wilson on his near post. However, Arsenal equalised with a scrambled goal from substitute Eddie Kelly – the first time a substitute had ever scored in an FA Cup final. The goal was initially credited to George Graham, but replays showed that the decisive touch came from Kelly after Graham had struck the shot.

Charlie George then scored a dramatic winner late in extra time, when his long range effort flew past Ray Clemence. This prompted George into a famous celebration – lying flat on his back on the Wembley turf waiting for his team mates to pick him up.

The match was played with a great spirit of sportsmanship by the players and was responded to by the fans. Arsenal’s victory and double win, after a gruelling 64-match season, was greeted with an ovation by both sets of fans at the stadium. This was repeated when Liverpool took their lap of honour after the presentation of the trophy and medals.

One of GN5’s programme collection with some famous autographs

Being an old codger, I get fed up with idle speculation and “what if scenario’s” and I get a titch angry when I read derogatory comments about our manager, club and B.o.D.

So it was good to read dandan’s piece on Peter Simpson. It brought back many memories both good and bad.

I dug out my stockpile of Arsenal programmes and rooted through them – boy that made the memories flood back.

The oldest programme I have is from Christmas Day 1948, it’s just a photo copy as the original did not stand the test of time.

We played Derby County and drew 3-3.
I had no money so I couldn’t get in legally so to see the game I had to crawl in through the turnstile under the legs of strangers – they always helped us poor kid’s out.

What a game we had Swindon in goal Barnes and Smith as full backs, Macaulay, L. Compton and Joe Mercer were the half backs with Roper, Logie, Rooke, Lewis and McPherson up front. I forget who scored the goals but I remember enjoying a great family party later that day. Drunk gunners.

My collection of programmes includes EVERY home league game for 1970/71 double season plus the league winning game at Spurs on May 2nd, 1971 and the FA Cup final against Liverpool on May 8th – gee I can still hear the roar when Charlie George scored our winner.

The first game that season was against Man U and we trounced them 4-0. The programme bears the autographs of George Best, Jon Sammels and Charlie George.

I remember that season only too well we won the Fairs Cup in 1970 and then the double in 1970/71 but before that we had a barren period of 16 seasons. If you had lived (suffered) through those years you would better understand why I get upset with today’s glory hunters. We were a mediocre mid table team that had no hope of winning anything but the team always got our full support – after all, what are supporters supposed to do – support – right? well some of today’s “fans” just don’t get it.

I also have the 1972 Cup Final programme when we played Leeds, that, of course, was the 100th Cup Final.

I have the Evening Standard from May 31, 1971 and the headline reads……

It’s gone brown and it’s a tad tattered but it still brings joy to my heart and a smile to my face every time I read it.

Frankly folks I never thought that I would derive so much pleasure from a 30 year old collection – but I sure do.