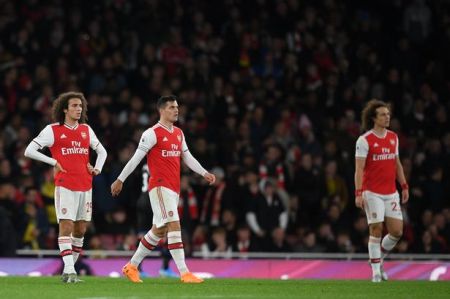 Saturday’s injury to Lucas Torreira should focus the mind on what we do when he’s not available.

He went off at half time after some rough-house treatment from Crystal Palace’s players (and with the useless referee having given him no protection).

It was bad timing for the pint-sized Uruguayan dynamo: since Unai Emery’s departure he has looked really good in the holding midfield role.

Hopefully he’ll be fit for Saturday’s home game against Sheffield United but even if he is we won’t be able to play him in every game without a break for the rest of the season.

Which brings us to the back-up option.

Assuming that we don’t buy or borrow another defensively minded midfielder in the January window (which seems unlikely), Arteta’s favoured alternative to Torreira appears to be a combination of Granit Xhaka and Matteo Guendouzi.

This will go down like a rat sandwich with a section of supporters who maintain that the Gran-Douzi axis is a liability.

That harsh observation is based on the occasions when the pair have played together under Unai Emery. In those outings Arsenal were incapable of stemming the attacking play of whichever opponent we were facing, leading to a ridiculous number of attempts on our goal and making poor old Bernt Leno the busiest ‘keeper in the EPL.

But was it the fault of Guendouzi and Xhaka in tandem? Or was it just that the whole team was floundering under Emery’s chaotic management?

Well, now we have something to compare those outings with.

The Gran-Douzi duo has played three halves of football under Mikel Arteta: they started against Leeds United in the FA Cup and played the second half against Palace after Torreira’s injury.

In the first half against Leeds they (and the team as a whole) were woeful. It was beginning to look like we could not control a game with that pair at the base of the midfield. But then came Arteta’s famously shouty half time talk, we emerged for the second half with better tactics (pushing our line 15 yards further up the pitch) and we looked like a team.

For that half, it certainly seemed as if Xhaka and Guendouzi could control a midfield and mostly neutralise the opposition.

Then we come to the second half against Palace. Although we conceded a goal in the half and were unable to score ourselves, we were never overrun. Indeed, after we went down to 10 men Palace barely had a sniff of goal and we might even have nicked all three points with a bit of luck.

As with the second half against Leeds, Gran-Douzi maintained positional discipline and the team as whole successfully kept a high line.

The absence of Torreira meant Xhaka sat deeper than he had when the Uruguayan was on the pitch, while Guendouzi had a bit more freedom to roam forward but still prioritised his defensive duties.

Clearly the Terrier is our first choice in the holding midfield role, but under Arteta’s coaching I think we’re beginning to see that Gran-Douzi can provide acceptable cover when he’s not available.

If you think I’m being overoptimistic, feel free to share your thoughts in comments.

This entry was posted on Monday, January 13th, 2020 at 10:13 am and is filed under Uncategorized. You can follow any responses to this entry through the RSS 2.0 feed. You can leave a response, or trackback from your own site.

41 Responses to Can Gran-Douzi Work?