The day has come… The Arsenal are back! Our season gets underway as we travel to St. James’ Park to take on Newcastle in their first competitive game under Steve Bruce. Newcastle are coming off a middle of the road season. They comfortably maintained their place in the Premier League with a 13th place finish. Notable departures include Ayoze Perez, Mohamed Diame, and of course Rafa Benitez. As far as arrivals, they spent big on two players, Joelinton and Allan Saint-Maximin and as previously mentioned, brought in Steve Bruce to take over for Benitez.

As far as our squad today, we will be without Tierney, Bellerin, Holding, and Mavropanos through injury as well asÖzil and Kolasinac due to ‘further security incidents’. Regarding Lacazette and Pepe, it seems very unlikely that they will start as the former will have to pass a late fitness test and the latter may need more time to adapt for a proper debut according to Unai. Here’s hoping that this is more about trying to keep Newcastle on their feet regarding how we are going to line up than neither of them actually starting. With that being said, I’m afraid that Unai is telling the truth and that our starting line up will be something similar to this: 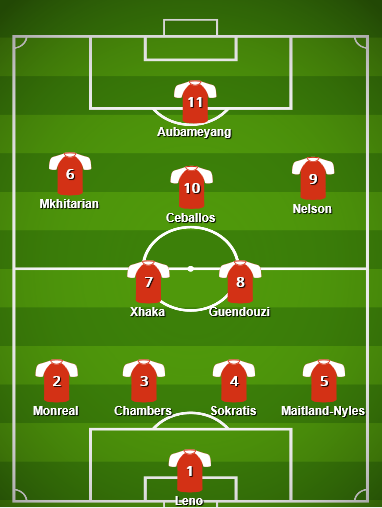 Notes: Feel like he may start Luiz as he is Premier League ready but given that he signed 3 days ago also have some doubts. I also want to mention that I think this is the team he will go with, not the team I’d prefer.

The start of the season brings new expectations as well as new questions. Last season we dealt with Newcastle quite well winning 2-1 away (conceded in the 90+1 minute) and 2-0 at home. As far as what to expect from game, my guess will be that given their new manager, they will sit a little deeper and be more compact than in previous seasons. Think it’s going to be a tough match without the previously mentioned players and will be happy with any win. So with that said, I’m going to go with a 2-1 win. Goals from Aubameyang and… lets go with Mkhitaryan give us with the three points as we move on to Burnley.

This entry was posted on Sunday, August 11th, 2019 at 9:38 am and is filed under Uncategorized. You can follow any responses to this entry through the RSS 2.0 feed. You can leave a response, or trackback from your own site.