This was the sixth of our preseason games. We fielded a mixed side comprising Leno, AMN, Chambers, Sokratis, Monreal, Willock, Xhaka, Guendouzi, Aubameyang, Mkhitaryan, and Lacazette.

My initial thought was that I was glad to see Willock playing consistently in the first team and that we are moving away from the Mkhitaryan and Mesut combo. In reality, I suspect they were probably rested because of the attack earlier in the week. With Mkhitaryan seemingly playing on the left, I wondered who’s going to be playing the Mesut role?

There was a minute of applause for former Arsenal player Jose Antonio Reyes who was taken from us way to soon, may he rest in peace.

One thing I have noticed is how quickly Arsenal have been starting games in the preseason, and this game was no exception. Monreal hasn’t looked up to it early in preseason, but today he was sharp, on one occasion bursting down the  left flank and crossing but not finding an Arsenal shirt, and then on another being bundled over in penalty box. Sadly the ref wasn’t having any of it.

Lacazette was replaced early on by Nelson. He was seen later wearing a protective boot –   let’s hope this was just for precaution. Aubameyang moved to central striker with Mkhitaryan now playing on the right. Willock looked really bright,  collecting the ball from Guendouzi and smartly turning for a low shot into the keeper, and then soon after was involved in an attacking move in the penalty box. But he was eventually smothered by the  amassed defenders. 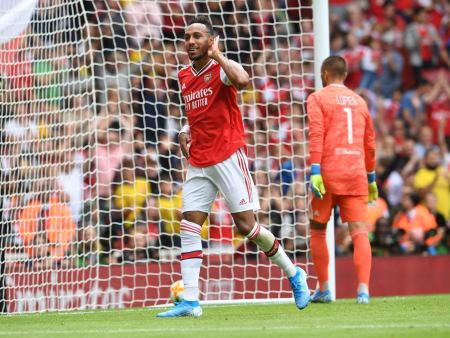 Arsenal displayed some great interchanging football. The opening goal came when Mkhitaryan who crossed to Aubamyang who headed the ball home, making it 1 nil to The Arsenal. Lyon had an appeal for hand ball by Chambers turned down, I wondered when I saw it if this would have been given in the EPL this season. Willock was ever present and was our best player in the first half.

The first change for the second half was Nketiah on for Guendouzi. With this, Aubameyang moved back out to the right, Mkhitaryan was now playing the link between midfield and attack which I think his best position, and with Eddie as striker.

The two sides were going at it second half with Lyon now creating more. Nketiah headed a ball over the bar, and then fluffed his lines again missing a cross from Nelson. Soon after that, Nketiah received a ball in the box and turned sharply but his shot was smothered by the keeper. The chant of Eddie, Eddie, Eddie rang round The Emirates, he really is a fans’ favourite.

Some poor defending by Maitland-Nyles  failing to block a cross led to the equaliser from Dembele. Shortly after, AMN did make a great block on Dembele showing he can play with discipline. Arsenal thought they had restored their lead when Martinelli put the ball in the back of the net but it was ruled as offside. Soon after, we failed to operate the offside trap correctly and Dembele made it 1-2 for Lyon. Arsenal had a few more opportunities but couldn’t take their chances. Lyon were crowned 2019 Emirates Cup Champions – not a big deal, it’s always been a slightly embarrassing competition, but still, it’s better to win than lose.

Arsenal’s second loss in preseason was frustrating. We were in control in both games and yet ended up losing. It was another promising performance by the Arsenal youngsters. Nelson had a good industrious game, although he struggled to get through Lyon’s defense. Willock was amazing once again and Eddie did the hard work by getting into the goal scoring positions but then  lacked the composure he had shown in earlier preseason games.

If only Arsenal could change how they defend. Good to see Chambers back and at least he put in a good defensive performance. There was one occasion when Sokratis brought down Dembele and was lucky not avoid a card. We’ve seen it many times before. Our defenders are too slow to play such a high line.

Leno 7 – solid game but was left exposed for both goals

Maitland-Nyles 6  – needs to work on his defending

Sokratis 6 – solid today but still reckless when given the chance 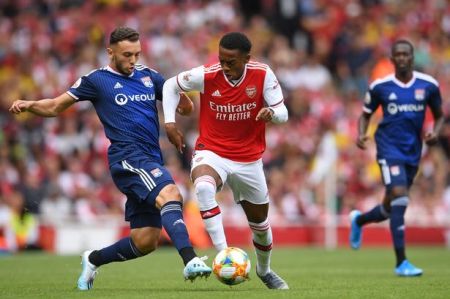 Xhaka 5 – Can the crowd please stop telling him to shoot

Guendouzi 5 – Nice to see him back

Mkhitaryan 6 – great assist for the goal

Lacazette 5 – let’s hope it nothing serious

Nketiah 7 – impressive as always, unlucky again not to score

Nelson 6  – I’m still waiting for him to impress me

This entry was posted on Monday, July 29th, 2019 at 8:34 am and is filed under Uncategorized. You can follow any responses to this entry through the RSS 2.0 feed. Both comments and pings are currently closed.