This was the fourth game of our pre season and, as expected, we fielded some of our young players.

At first glance it would seem to be a 343. I didn’t realize we were still changing formation? I thought we would be sticking with the 433. One reason I can say the 343 is a good formation for us to play is because of Monreal as is he is too slow. I would have preferred to see Thompson over Kolasinac and Medley over Mustafi.

Nothing particularly remarkable from Arsenal in the first 15 minutes, Monreal being sloppy and Mustafi being Mustafi. Florentina were defending really well as a unit and Arsenal were shifting the ball left to right then right to left looking for an opening. Until eventually a brilliant move from Saka (Zaha who steups) playing in Kolasinac who lays on a plate for Eddie who was cool as ever rifling the ball into the net. Some more clumsy defending and more Monreal being sloppy. Olayinka and Burton needed to offer some support to the defense, Nelson to show a bit more probably it was because of Jenkinson Arsenal not getting the same dynamic on the right hand side as they are getting from Saka and Kolasinac on the left. First half ended 1 – 0 and we were fortunate not to have conceded, Martinez really proving to be a great keeper. 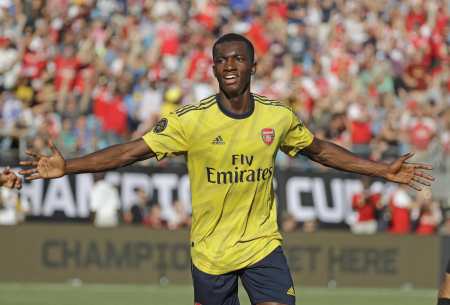 I was praying that Mustafi and Monreal would come off for the second half and we would revert to a 433, letting Medley show Mustafi how to defend.

Well Emery listened to half of my prayers by reverting to 433 which made us definitely looked much better. Nelson was move to the left flank where he began showing his quality and on one occasion using his smart feet to cut inside and get a shot off but it curled straight at the keeper. Mkhitaryan’s first contribution in the game was to get booked, his second one was to pass the ball to Lacazette who laid it off to Eddie making it two nil, One thing you have to admire about Eddie is his ability to get space in the box. Willock held his own again when brought on and was smartly set up by Lacazette making it 3 goals to nil

One of the Star performer so far for me was Saka, I wouldn’t have any qualms him starting in the opening game. Eddie has a great ability to create space in the box. Mustafi is woeful and I hope he is frozen out just as Emery did with Mesut. We played much better when switching to 433/4231. It was nice to see us continue our fine form and the youngsters taking their chances.

Mustafi – Another horrible game from Mustafi … 4

Nelson – Was invisible first half, came alive when he went to left … 6

Lacazette – Much more lively than in the previous game, came up with 2 assists … 7.5

Mkhitaryan – had an ok game but did we really need to see him play … 6.5

Other Subs not mentioned …5

Emery – Has the team looking sharp, his 343 experiment failed and he still doesn’t realize mustafi will cost us goals against better teams… 5

This entry was posted on Sunday, July 21st, 2019 at 8:40 am and is filed under Uncategorized. You can follow any responses to this entry through the RSS 2.0 feed. You can leave a response, or trackback from your own site.