Liam Brady and me … a personal story

A personal tale of my earliest Arsenal experience, and my favourite  player. 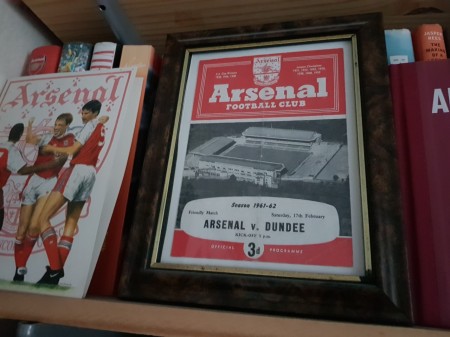 “My first game to watch The Arsenal was in season 61-2, and the match programme was presented to me by Chas a good few years ago now. I stood on the South Bank, on my home made wooden stool, and waved enthusiastically to our Dad as he sat in his West Stand seat.

The opposition had two players who played a significant part in North London football in the years that followed. In defence was a big, blonde centre back called Ian Ure, and in attack a tall streak of p*** ( sorry, old habits) called Alan Gilzean.”

My blog initials stand for LiamBradyGod. Needless to say my favourite player of all time.

He signed this black and white photo for my Bros at an Arsenal event, but only if they could name the other players in the picture. They could. Can you?”

I have one other story about Liam that I would share since it also illustrates what a good lad he was/is.

Twenty years ago my son was travelling to Loughborough Uni for an interview and spotted Liam in the queue for a taxi to the University. ( He was going to a conference  himself at the University). Matt plucked up courage to talk to Liam mainly to tell him I was his greatest fan. Liam chatted with Matt about the Arsenal, offered to share his taxi (and paid for it), and wished him good luck with his interview on arrival at the University.

A story Matt relayed to me with glee on his return, almost surpassing for me the news he had been accepted to read a degree at the University.

This entry was posted on Saturday, July 13th, 2019 at 9:18 am and is filed under Uncategorized. You can follow any responses to this entry through the RSS 2.0 feed. You can leave a response, or trackback from your own site.

61 Responses to Liam Brady and me … a personal story