Emery is wrong … build the team around Özil

We have a manager who I took against within about two weeks of his arrival. Because I seemed to be in such a minority, I drifted away from the two or three Arsenal supporters’ blogs that I was in the habit of reading. Everyone liked the new energy, the direction the club was taking, and certainly the results during the first half of the season justified the optimism. I didn’t like it – any of it.

When you have a set of round pegs, you can try to squeeze them into square holes, you can throw them away and buy new square pegs, or you can create round holes into which to fit them. From the outset, Emery forced his round pegs, and the rounder they were, the more he tried to crush them into his shape of choice.

When you have three of the most potent, exciting, skilful footballers in the world, you can start your system with them, and build around them – or you can mess around with them and make them what they’re not.

When you have some of the best talent coming up through the Academy, you can encourage them, fast track them, utilise them: or you can bring in other exciting young players to block their progress.

For me, Emery failed in every one of these aspects.

Many months ago, I wrote on here that I thought Mesut Ozil could not fit into the new system, and was criticised for that view. Ozil is one of my all-time favourite players, second only to Dennis in garnering my admiration. I choke at the thought of him not playing in red and white any more. I was apoplectic at the way Emery treated him (I’m convinced this was a reaction to his losing the PSG dressing room). Alongside Ozil, how were Lacazette and Aubameyang treated? Confusingly. When they were both fit, the manager took far too long to play them together.

Unequivocally, in the right system, those three together would rip defences to shreds (as they all too occasionally have), at least as potently as the Liverpool front three.

Five of our best youngsters were farmed out for experience. All well and good; probably the right thing to do. Emi

Martinez has been our best goalkeeper for a while now, but has been consistently shunted back, and then loaned to Reading, where they think he’s a hero. Callum Chambers was player of the year at Fulham in a DM role. Krystian Bielik pulled up trees making a massive impression at Charlton. Reiss Nelson and ESR furthered their education in Germany, and certainly Nelson impressed, making the shortlist for Rookie of the Year.

The point is, what now? The latter two are attacking players, wingers or attacking midfielders. But we’re bidding for Zaha, Brahimi, etc. Chambers and especially Bielik might well be the answer to our DM shortcomings. Chambers is maybe a bit slow. Bielik isn’t, is a big unit with all the skill. He’s had a few growing pains, but he’s possibly through them at last. If he doesn’t get his chance this year, we’re going to lose him. Martinez should certainly be allowed to vie with Leno to start – I personally think he’s better.

Then there are the others, who stayed at the club. Jordi Osei-Tutu has gone, a really promising pacey right back, who might have been tried in order to free up AMN for a more suitable role, but never was. Willock was a way better player than Guendouzi and Xhaka last season, but got his chance too late. He’s fleet, skilful, proper box-to-box, good defensively, 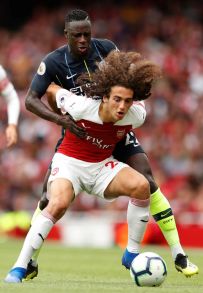 and has an eye for goal (even if he had something in it in the Europa Final!). The same things could be said of Ainsley Maitland-Niles who has endured being put at right back in order to get into the team.

The players who Emery picked: Xhaka, good when the team is dominating and not exposed to the fast break, but awful if rushed, because of his lack of pace, which forces him into rash challenges; Torreira, everyone’s favourite because of his insane commitment to the cause, but actually too lightweight, and not really quick enough; Guendouzi, a player full of promise, but whose main contribution was falling over to draw fouls.

What of Emery’s tactics?

We were promised measured playing out from the back to draw the opposition out of position. That was a disaster, especially when Cech was in goal, more so when Mustafi was the defender. Even Leno abandoned it late in the season. We were promised a high press to win the ball back early and near the opposition penalty area. It spluttered throughout the year, and was less used towards the end. He did have a magic touch in the first half of the season, with his substitutions and timing thereof, but even that waned. I’m not aware of any other tactics, or tactical shifts during games. He did tinker with the old back three/back four dichotomy, but the result seemed more confusing for the defenders than helpful.

And the man himself? He was much lauded for his determination to speak English from the get-go, but I found him incomprehensible, no less so after a year in the job. When I did understand him, he spoke in totally meaningless platitudes, and entirely without humour – how I missed Arsene’s wit and wisdom.

Well now he wants new toys to play with – Zaha et al. And as always at this time of year, the fans are in a frenzy to buy this star, that rock, the other tyro. This is why I thank fellow blogger Fred for pointing out the obvious, that you can’t promote youth AND buy stars. It doesn’t compute.

Me? I’d start with Ozil Lacazette and Aubameyang. I’d have AMN, Willock and Bielik as first/second choice midfielders, in any combination according to circumstances. I like several of the attacking youngsters, who should certainly be in the squad, along with Iwobi. Martinez would be my goalie. Central defence and left back might need a bit of shoring up, although there’s not much wrong with Papa, Holding, Chambers and Mavropanos. Monreal has lost too much pace. Koscielny needs a final season like Mertesacker’s. Mustafi… well, Mustafi! Let Xhaka go, let Torreira go back to Italy, sell Elneny, Jenkinson and Mhkitaryan. And Mustafi… Hopefully, Bellerin will return undiminished. So maybe Tierney to fill left back is the only player I would consider.

Sit back with a rock solid defence, fast transitions with AMN and Willock to Ozil, unlock the strike force. Easy.

This entry was posted on Wednesday, July 3rd, 2019 at 8:29 am and is filed under Uncategorized. You can follow any responses to this entry through the RSS 2.0 feed. You can leave a response, or trackback from your own site.

50 Responses to Emery is wrong … build the team around Özil