Nineteen players have achieved the feat of scoring 100 goals for the Club over the past 96 years. The players are sorted by the number of games taken to reach the 100 goal mark. Doug Lishman sits at number 8

Born in Birmingham, Doug first played as a centre forward for non-league Paget Rangers, before signing as a professional for Third Division South Walsall in August 1946. In two seasons with the Saddlers, Lishman scored 26 goals in 59 league appearances. 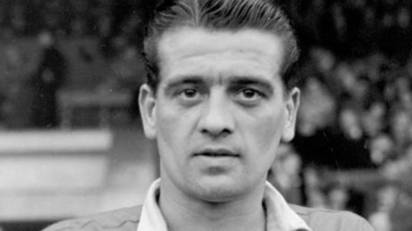 He was signed by Arsenal in the summer of 1948 for £10,500, as backup for Reg Lewis, who was only 28 but was injured frequently, Doug made his debut against Sheffield United on September 4, 1948, but after a promising first season (scoring 13 goals in 25 appearances), and his 1949-50 and 1950-51 seasons were marred by injuries. He was passed over for the 1950 FA Cup final (which Arsenal won 2-0), in favour of Lewis and Peter Goring, and then just as he came back into the Arsenal first team, he broke his leg playing against Stoke City in December 1950.

However, he recovered to become Arsenal’s top scorer in 1950-51, and the next season hit 30 goals, including three hat-tricks in three successive home matches; (GN5 saw them all)

Arsenal finished third that season. The following season (1951-52) they reached the FA Cup final, only to lose to Newcastle United; a series of injuries meant only eight fit players finished the match (no substitutes were allowed in those days). Doug came close for Arsenal with a header, which clipped the crossbar, but Arsenal lost 1-0.

The following clip includes Doug Lishman getting the third against Chelsea in the the 1952 FA Cup semi-final at White Hart Lane. There are some brilliant shots of the crowd (Freddie Cox is the star helping to stuff Chelsea (pre-chav days) 3-0)

His disappointment was soon forgotten, as Arsenal won the League Championship in 1952-53. He was again Arsenal’s top scorer, this time with 26, and with every goal proving vital, Arsenal won the title on goal average above Preston North End. His form was good enough for him to be picked for an England B match against Scotland B in March 1953, although he was never capped for the full national side.

Doug was top scorer for another two seasons after that, making it five successive seasons as the club’s top scorer in total. He scored 137 goals in 244 appearances, making him the club’s tenth-highest goal scorer of all time. However with younger men like Derek Tapscott and David Herd taking over goal scoring duties for Arsenal, Doug was dropped from the first team in 1955-56.

Doug teaching his son how to head the ball

In March 1956 he was sold to Second Division Nottingham Forest. He scored a hat-trick in the match that got Forest promoted (a 4-0 win over Sheffield United) to Division One in 1956-57, but decided to retire in the summer of 1957. He left the game entirely after retiring. He joined his father-in law in business (furniture retail) in Stoke on Trent, later taking over the business himself. He continued to live in Stoke on Trent until his death in 1994.

Doug scored his 100th goal for Arsenal against Cardiff City at Ninian Park on September 26th 1953.

Doug Lishman was one of my favourite players as a kid.

This entry was posted on Saturday, May 18th, 2019 at 7:16 am and is filed under Uncategorized. You can follow any responses to this entry through the RSS 2.0 feed. You can leave a response, or trackback from your own site.