Nineteen players have achieved the feat of scoring 100 goals for the Club over the past 96 years. The players are sorted by the number of games taken to reach the 100 goal mark. David Herd sits at number 9

David Herd was born on 15 April 1934 in Hamilton, Lanarkshire, his mother went north to family just prior to his birth so he could qualify for Scotland like his father who helped Manchester City win the FA cup a few weeks after David’s birth. 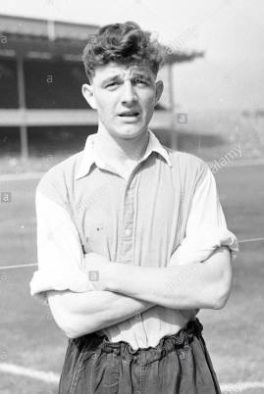 David grew up in Moss Side beginning his professional career at Stockport County as an amateur in 1950. He signed professionally a year later and in May 1951 played as a 17 year old in the same Stockport forward line up as his 39 year old father Alec. David scored in the 2-0 win. Herd caught the eye of Matt Busby in 1952 but a hiccup scuppered the transfer deal and he remained at Edgeley Park in the 3rd Division North. National Service intervened and for two years he was in the RAF, and a few hours after his demobilization on August 24th 1954 Arsenal’s manager Tom Whittaker swooped and purchased him for £10,000.

Herd made his Arsenal debut on 19 February 1955 at home to Leicester, and took a while to bed into the team however during the 1957-1961 seasons he was The Arsenal’s top goal scorer for the four successive seasons. One of these goals was scored for the Gunners in the Busby Babes’ last match on English soil, a 4-5 defeat at Highbury on 1 February 1958, often noted as one of the greatest ever games.

For Arsenal, Herd scored 107 goals in 180 appearances & at one point an explosive right foot missile of his was timed at 72.5 mph, it being no surprise he was nicknamed “Hot Shot” Herd. He is the club’s 16th highest ever goalscorer, with a hit ratio of 0.594 goals per game, which places him just outside the all time top ten of Arsenal’s best strike rates. He also played 85 games in the reserves and scored 46 goals, one of which was in the 1954-55 final of the London FA Challenge Cup in which Arsenal beat West Ham. 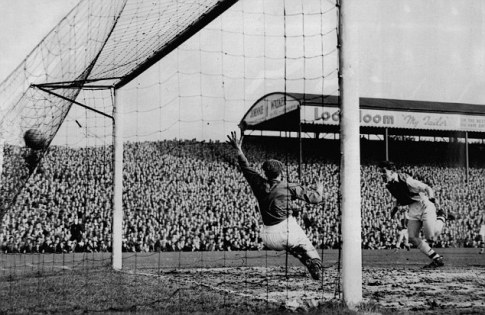 His final match for the club came on 29 April 1961 at Everton, where he scored in a 1-4 defeat. Despite all his goals, the best League position while at the club was third in 1958-59, and it would have been understandable were he to look elsewhere for the chance of honours. This course of action appeared to be encouraged as manager George Swindin offered him as a makeweight in deals for both Denis Law and George Eastham in March and September 1960. More than hinting he was not part of the manager’s longer term plans, it was somewhat ironic as Herd ended up the 2nd highest scorer in the whole of the top flight during the 1960-61 season.

Consequently Herd moved to Manchester United on 26th July 1961 for £40,000. There he won 2 League and 1 FA cup winners medals, and he also received a European Cup winner’s medal as a squad member. A broken leg in 1967 put paid to his position in their forward pecking order. He is 13th in Manchester United’s all-time goalscoring list, 145 goals from 265 appearances, which was almost identical to his scoring ratio while at Arsenal.

On 15 July 1968 he moved to Stoke City on a free transfer, and then onto Waterford briefly in 1970 before ending his playing career which had seen him net 272 times in 516 appearances!

A Scotland international, he scored 3 times in the 5 occasions he appeared for his country. All of his caps were won while he was at Arsenal at it was ridiculous for such a natural goal scorer to only play 5 times for his country and is an indictment of the SFA in repeatedly ignoring a title winning forward.

A short spell as manager of Lincoln City in the early 1970s saw his football career come to a halt and he ran a number of Manchester based car garages before retiring in 1999. He also enjoyed playing golf and cricket. 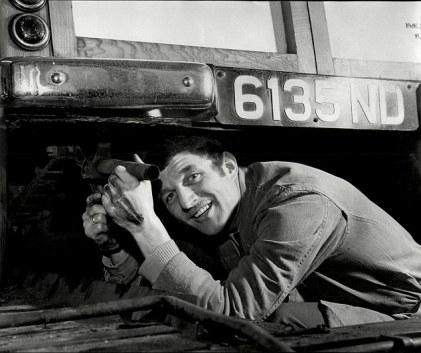 He joined the Gunners in what is now known as “The Dark Era”. The team which had won the FA Cup in 1950 and the League in 1953 was breaking up and during Herd’s seven years in North London, the Gunners never finished better than third. That was in 1958-59, the season in which Herd won the first of his five Scottish caps, when he was one of four debutantes named for the opening Home International of the season, against Wales, in Cardiff.

He left football to enter the motor trade in the Manchester area, running a garage in Urmston right up until he reached retirement age in 1999. He had first invested in the business in 1965, already looking ahead to the end of his playing career. It gave him ample opportunity to indulge in his love of fast cars, while his sporting instincts were satisfied by his long-time membership of Ashton-on-Mersey Golf Club – where he had a low handicap for many years, and by playing cricket for various club sides around his home in South Manchester.

A “destructive” batsman, he was still playing first-team cricket into his 60s, while, away from the sports field, he enjoyed cruising holidays, visited Malta at least once each year and made two trips back to Scotland each year, to see family and to attend the Dunhill Links Championship at St Andrew’s, which he loved.

The following clip shows David Herd scoring his first goal at Highbury. It just about shows his second as well as Arsenal beat Sunderland 3-1 in February 1956. (Jimmy Bloomfield’s goal is a cracker). The film quality is appalling as is the frozen pitch but the clip is worth watching.

David scored his 100th goal for Arsenal on January 1st 1961 at Highbury, it was the third goal in his third hat trick of the season.

This entry was posted on Friday, May 17th, 2019 at 7:10 am and is filed under Uncategorized. You can follow any responses to this entry through the RSS 2.0 feed. You can leave a response, or trackback from your own site.