Arsenal FC – Away to Valencia

Well this has turned into a real must win game.

Here are the odds from five betting sites and only one predicts an Arsenal loss.

We are leading 3-1 going into the second leg at Valencia’s Mestalla Stadium and must avoid losing by two clear goals in order to progress to the final; on the other hand Valencia’s task will become increasingly more difficult if they allow Arsenal to score. 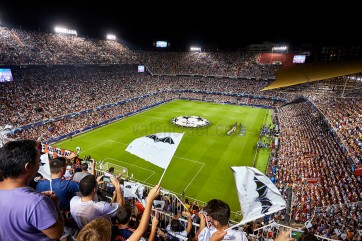 The Mestalla will be intimidating

Valencia have lost just one of their last 21 games at home in all competitions and have lost just three times in total, twice in La Liga and once in Europe, which was a 2-0 loss to Juventus in the Champions League.

Arsenal have won just two of their last eight games on their travels between cup and league competition and have won just four out of 16 road matches since the start of December.

Valencia will be hoping to win a European trophy for the fist time since they beat Marseille 2-0 in the 2004 UEFA Cup Final.

Arsenal is looking to reach their first European final since they lost to Barcelona 2-1 in the 2006 Champions League final.

Will we march on to the Europa League Final on May 29th at the Olympic Stadium in Baku or will our poor away form be our Achilles heel?

My belief is in Unai Emery pushing our squad beyond its natural limits and on to Baku.

This entry was posted on Tuesday, May 7th, 2019 at 6:39 am and is filed under Uncategorized. You can follow any responses to this entry through the RSS 2.0 feed. Both comments and pings are currently closed.

45 Responses to Arsenal FC – Away to Valencia