Three at the back, wing backs for width, narrow up front and no Terrier. We need to score goals so hopefully our two main strikers on the pitch can do the business, but they will need service.

Arsenal’s response was majestic. Lacazette with a brilliant turn set a sprinting Auba free through the middle. Pausing to take the keeper out of the game, he laid it off for the following up Laca to stroke the ball into an empty net. 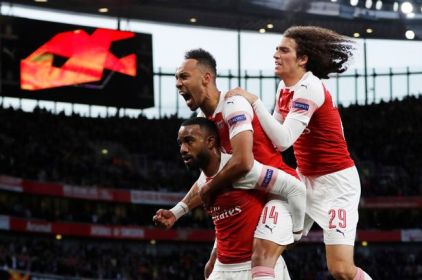 Seven minutes later, yet another spin by Laca saw him beat the offside trap and be available for Xhaka to pop it beautifully right on to his forehead. The ref’s wrist piece told him the ball was miles over the line when the keeper tried to claw it out after it had come off the post. Laca knew it was in – cue delighted celebrations and suddenly we were in front. Wow.

We were excellent in the first 20 of the 2nd period with a full on power play. Every single player snapped into challenges determined to be first to the ball. It was a shame we couldn’t capitalise and score a third and fourth during this purple patch.

As energies dwindled, Valencia began to come back into it and Cech made a brilliant save to keep the slender lead in tact.

Laca’s chances came and went. He really should have grabbed his third but made a dog’s breakfast of a simple header and then hit the keeper’s legs in a one on one.

In the 88th minute Valencia made a time wasting substitute, keen to hang on to the 2-1 and their precious away goal. I began to think about how a slim lead was better than nothing but was doubtful it might be enough.

Then Mkhitaryan, who had provided real thrust when coming on for Mesut, had a shot blocked. The ball ricocheted back to Laca who tested the keeper with a deflected effort but again the ball found its way to Kolasinac who floated his classiest ball of the season to the far post where Auba shinned it in. Perfect. From a squeaky 2-1 to a far more convincing 2 goal cushion. Well played, lads. 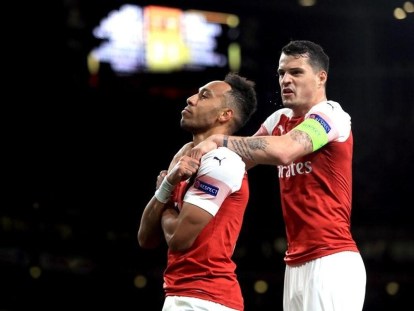 We’ll still probably require an away goal in the Mestalla but at least we’re in there with a great chance of the Final.

The first half was pretty even but our second half dominance merited the 3-1.

Another great thing about that late goal was that those who can’t be bothered to remain in their seats until the end of the match, all missed it.

Mustafi – a fine performance from the German – pre-match worries from Gooners were banished by Shkodran’s commitment , drive and effort … 8

Koscielny – looked to have pulled a hamstring early in the 2nd half but played on fighting for the cause – hope he’s ok, his experience is invaluable  … 8

Maitland-Niles – some good, some not so good, but his positive contributions were excellent after he settled down … 7

Kolasinac – not brilliant in the first half but his final ball got better and better, as did his passing and interplay on that left flank in 2nd half – gem of an assist … 8

Guendouzi – I was surprised to see him subbed as he seemed to be playing well at that time, intercepting and interchanging to great effect   … 7

Lacazette – ran his socks off, scored two goals – could have had two more … 9

Aubameyang – sprinting around with real purpose, it really seemed that Auba had saved himself for this one – instrumental in Laca’s first and got that vital 3rd at exactly the right time … 9

Marcelino Garcia Wagner – it was perfect that he was satisfied with the 2-1, tried to waste time and then looked crestfallen when he found his side two goals behind … 5

How important could this @Aubameyang7 goal turn out to be?! 😄

This entry was posted on Friday, May 3rd, 2019 at 5:30 am and is filed under Uncategorized. You can follow any responses to this entry through the RSS 2.0 feed. You can leave a response, or trackback from your own site.