Nineteen players have achieved the feat of scoring 100 goals for the Club over the past 96 years. The players are sorted by the number of games taken to reach the 100 goal mark. Theo Walcott sits at number 19.

Theo James Walcott was born 16 March 1989 in Stanmore, London, but grew up in Compton, Berkshire. He attended Compton Church of England Primary School and The Downs School. Nike agreed to a sponsorship deal with Walcott when he was fourteen years old. He is a product of the Southampton Academy and started his career with Southampton before Arsene Wenger signed him for Arsenal in 2006 for £5 million.

He initially joined as a scholar, having agreed to sign a professional contract on his 17th birthday on 16 March 2006.

On 30 May 2006, Walcott became England’s youngest ever senior football player aged 17 years and 75 days. In December, he received the BBC Young Sports Personality of the Year award. On 6 September 2008, he made his first competitive start in a World Cup qualifier against Andorra. He has represented England at the 2006 World Cup and Euro 2012 and has 47 caps, scoring eight goals. In September 2008 against Croatia he became the youngest player ever to score a hat-trick for the full England side, aged just 19.

His first goal for Arsenal came in the 2007 League Cup Final against Chelsea at the Millennium Stadium, Cardiff, on 25 February 2007. His 12th-minute strike was overshadowed by events later on in the match: John Terry was knocked unconscious, Didier Drogba scored twice to give Chelsea a 2–1 victory and three players were sent off following a mass brawl.

Some words from the man himself-

“I was only 17 and hadn’t even played in the Premiership when I went to Germany. It wasn’t my decision to pick me. But it was good experience to train with world-class players, see the way they handled themselves.

“I never read the papers, so I never know what people are saying about me. That helps. The environment I’m in with the other players around me, I don’t really see what is in the papers. Of course I wanted to play for Arsenal. But I was only 17 and I didn’t want to play too much and get injuries. The boss has done brilliantly with me and now I’m ready to push on.”

Football is about opinions, but love me or hate me I don’t really care,” he said.

“I have been so pleased with everything I have achieved and I’ve enjoyed everything about it. Even with the injuries, it is part of the game. I genuinely wouldn’t change anything, I don’t have any regrets.

“I’ve seen players come through who everyone says, ‘They’re the next best thing’ and they put so much pressure on them, but then they go down the leagues and down the leagues and you just don’t hear about them anymore. But if you’re strong up here [mentally] and you have good people around you, then you can get through it.”

This may come as a surprise, but Walcott is a published author.

He has written no less than four children’s books for his “T.J and the…” series. 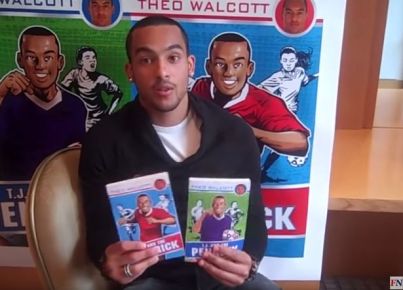 He was just 21 when they were published in 2010. The lead character, TJ, appears to be based on the author. Goodreads rated every one of the books at least 4.5/5.

Throughout his last season at Arsenal, he was mainly used in the Europa League and in the EFL Cup, and he only made 6 substitute appearances in the Premier League. By October, he was increasingly on the fringes and was criticised following a poor performance when made captain in a 2–1 League Cup victory at home to Championship side Norwich City.

On 17 January 2018, Walcott signed a three-and-a-half-year contract with Everton, ending his time at Arsenal.

This entry was posted on Monday, March 25th, 2019 at 6:49 am and is filed under Uncategorized. You can follow any responses to this entry through the RSS 2.0 feed. You can leave a response, or trackback from your own site.