Granit Xhaka is a marmite player. There are those who think he only ever passes the ball sideways or backwards or, at least, rarely forwards. Some believe Xhaka is an accident waiting to happen, either by dwelling on the ball in our own final third, making ill-advised passes or by lunging into rash challenges. Others see him as the fulcrum of the team, anchoring the midfield, always available, never shirking the hard yards necessary to be defensive central midfielder. 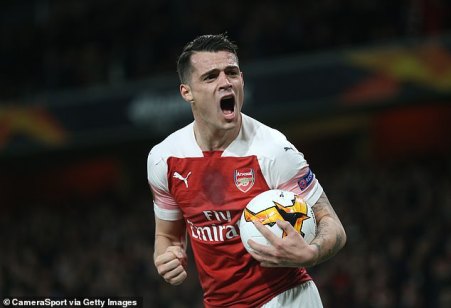 Admittedly, he has picked up 23 yellow cards and 2 reds in his 95 Arsenal appearances so far. In January 2017 there were articles about his appalling red card record with his 9th sending off in 3 years as he was dismissed against Burnley. He’d been unlucky to be sent off a few months earlier when deliberately tripping a Swansea player who’d only just crossed the halfway line. Since then he’s cleaned up his act with no further early baths.

His passing efficacy is up for debate, but not the sheer metronomic volume of those passes. Granit has made just over 500 more passes than the next Arsenal player in the list, 1921 to Lucas Torreira’s 1417. When Xhaka is playing well, the team plays well. He dictates that central area in front of the back four without being the most mobile of defensive anchors in a more Makelele style.

When Granit steps into the bear pit, he wears his heart on his sleeve, geeing up those around him and revving the crowd up on occasion, too. We’ve lacked a vocal presence at the heart of the team for years. A captain like Laurent Koscielny leads by example but it’s doubtful many of his fellow professionals would quake in their boots if Kos decided to take them to task. Granit, on the other hand, does seem to possess a fiery, bullish temperament to be feared and respected

When Auba missed that late pen against the spuds which would have consigned them to a deserved defeat, it was Granit who was immediately there at his side giving him support. No William Gallas ‘sitting on the halfway line crying’ antics for the big Swiss but instead there seems to be a genuine desire to cajole and encourage those around him.

On the pitch, Xhaka is a clear leader in the team. He controls the game, he’s passionate, vocal & he picks teammates up when they’re down.

Off it, he says the right things in interviews, conducts himself with class & does things like this. He ticks every box to be captain. https://t.co/JYpA85AyTe

Granit always features prominently when playing for his home country, though his Albanian roots perhaps preclude him from being the on-field captain when the present captain, Stephan Lichtsteiner, hangs up his boots.  Off the pitch Granit conducts himself with an air of class and appears to be a fine ambassador for the Club.

Unai Emery certainly seems to hold him in high regard and it is with great anticipation that the Arsenal fans view him lining up a long ranger on that sweet left peg. Ask David De Gea or Mignolet (?)  🙂

What do you think? Is Granit a future captain or would you choose an alternative from the current playing staff?

p.s. I’m choosing to ignore tabloid scaremongering that Granit wants away to progress his career. The man’s just signed a new contract until June 2023, ffs.

This entry was posted on Sunday, March 24th, 2019 at 6:46 am and is filed under Uncategorized. You can follow any responses to this entry through the RSS 2.0 feed. You can leave a response, or trackback from your own site.

34 Responses to Granit for Captain?