The team selection saw Ozil picked to play with Auba. Some have been suggesting this is a decent pairing, complementing each other, as do Rambo and Laca.

Iwobi got us off to the perfect start with his curler towards the far post which sneaked in past the unsuspecting keeper. 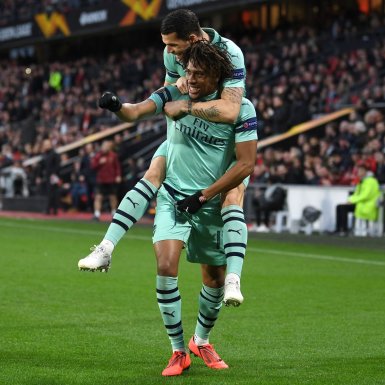 There seemed to be an awful lot of French players pretending that they’d been cracked on the head. Ben Arfa was the worst culprit, the disgusting little maggot.

Arsenal’s attacking play was very slack. Auba couldn’t trap a blind rabbit and Mesut didn’t seem to want to repay any of the manager’s faith in him.

We seemed to be lacking that link between Xhaka/Torreira and the front 4, a scenario we’ve seen several times already this season. Micki should be realising this and stepping into the breach but instead was fairly anonymous. Iwobi also seems a luxury away from home when his other three attacking partners are under-performing.

Having said that, both Torreira and Mustafi should both have done better with very respectable chances within the Rennes penalty area. We seemed to be in control on the whole, barring some sort of outside intervention. Cue the ref.

Sokratis had received his first yellow when the cheating Ben Arfa fell over him which was to prove costly 5 minutes from half time when the referee was conned by another French dive as Big Sok barely touched the onrushing striker who went down as if he been felled in the forest.

So, down to 10 men and made worse when the lad taking the resultant free kick hit a pearler as the ball bounced back to him off the wall. Cech had no chance as the ball flew past.

Iwobi was subbed shortly after half time with Guendouzi coming on in his place. We really needed 3 or 4 additional subs at that moment but that’s not allowed.

Nothing stupid, lads, see if we can salvage a draw with a man down. Oh dear, what followed was a flashing near post finish from Nacho, while  Auba was debating with the ref whether it was a corner or not, putting paid to any notion of salvaging parity.

Other chances followed but it did seem as though we might take a 2-1 defeat back to the Emirates and finish the job there. But then to be caught with so many men forward in the 88th minute though, was unforgivable. How stupid can a team collectively be?

The absolute definition of irony pic.twitter.com/HD0t9wGpMh

Rennes deserved to win despite their transparent cheating, diving and all-round shit-housing. If I never see Ben Arfa’s piggy-like face again, I’ll be happy. Oh no, just remembered, he’ll be at the Emirates next week.

On this showing, we stand virtually nil chance of winning the tiddly winks cup let alone the Europa. Complacent, lazy, idiotic, gutless – all words which could be applied to our team’s performance in this first leg.

Originally the thought of 17 days without a game for the second half of March seemed a terrible prospect; now it doesn’t seem so bad. Then again, a decent result on Sunday might make me think differently.

Koscielny – as captain he leads by example – Arsenal required someone to scream at them in tonight’s game, lifting them up to perform at a higher level, didn’t happen … 6

Torreira – I still don’t understand why Emery wants him to play so far forward sometimes – miles out of position for the third, no idea why he would think that was sensible … 5

Iwobi – not a game for him, unfortunately, but gets an extra point for scoring a majestic curler … 5

Guendouzi – where was he meant to be playing? – I’m not sure he knew – all over the place is probably the best description … 5

Kolasinac – on for the ineffectual Aubameyang … 6

Ramsey started this counter attack as our most advanced player and was the player that was sprinting back to try and defend the back post. Don’t even know where Monreal and Kolasinac were.
pic.twitter.com/Z5mPNTYoMh

Arsenal have won a knockout tie once after losing the first leg 3-1 away – they beat Anderlecht in the return 3-0 at home in the final of the 1969/70 Fairs Cup.#UEL @Arsenal

This entry was posted on Friday, March 8th, 2019 at 6:19 am and is filed under Uncategorized. You can follow any responses to this entry through the RSS 2.0 feed. You can leave a response, or trackback from your own site.