Arsenal FC – Our away record against the spuds

Spurs played their early matches on public land at the Park Lane end of Tottenham Marshes where they had to mark out and prepare their own pitch. Occasionally fights broke out on the marshes in disputes with other teams over the use of the ground.

(Not much has changed over the years – they are still hooligans)

Tottenham Hotspurs 1897 – the chap lying down was especially hard

It was at this ground in 1887 that we played our first away match against Spurs in a non-league game, when we were known as Royal Arsenal; the match was called off due to poor light with Spurs leading 2-1.

Our first (WHL) League Championship was in a 1-0 victory on May 3rd 1971. We went on to beat Liverpool 2-1 at Wembley to claim our first League and FA Cup double. The second came on April 25th 2004 when we drew 2-2 in our Invincible season. Two incredible seasons for Arsenal and total misery for Spurs knowing they could have been the spoilers. To rub a little more salt in their wounds, we have won the FA Cup on eight occasions since their last win in 1990/91.

(There was something very exhilarating about writing that!)

This was intended to be a post on our away games but I thought I’d spice it up a tad.

Anyway – based on our EPL results we have a 19.2% chance of winning and a 53.8% chance of gaining points. Understandably the odds are with Spurs but as pointed out above we have won in the most difficult of circumstances and it would be just great if we were to put a dent in their efforts to finish first (if any further dents were needed 🙂 ). 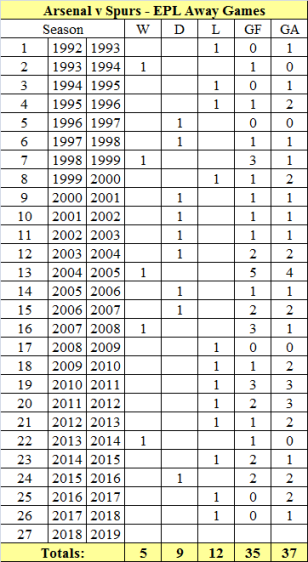 One thing about Rosicky, he was a scorer of an absolute belter against the Spurs. Will miss that icon! pic.twitter.com/H8y4DUIXZM

Hold on to your seat belts this may be a rough ride.

This entry was posted on Friday, March 1st, 2019 at 7:11 am and is filed under Uncategorized. You can follow any responses to this entry through the RSS 2.0 feed. You can leave a response, or trackback from your own site.

45 Responses to Arsenal FC – Our away record against the spuds