Not the most entertaining evening at the Seaside – Blackpool ratings

Another tie against a lower league side, another chance for our exciting youngsters to get some Emirates pitch time. Well, that’s always the hope. The reality is usually far less enticing.

Pretty dire throughout. The only moment of quality was the goal. Stephan Lichtsteiner made a superb diagonal run in behind the Blackpool bus. Matteo Guendouzi picked him out with a glorious punched wedge shot and the Swiss trooper managed to divert it past the stranded Tangerines’ keeper. 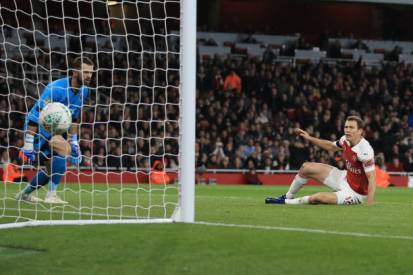 That really was the only football worthy of note in a turgid display of insomnia-crushing tedium.

After the break, it seemed a case of, ‘score the second and we can all go home’. It duly arrived when a Jenko cross-cum-shot with his standing leg was palmed out by the Blackpool goalie back into the danger zone where Emile Smith Rowe shinned it into the turf and high up into the net. 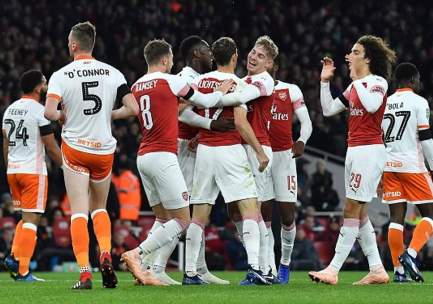 Enter the referee, who was obviously disgruntled that his 15 minutes of fame was likely to peter out like a damp firework. He’d already missed several touches for corners and the like, along with the help of his incompetent sidekicks, but the coup de grace was still to come.

In the 56th minute Guendouzi put his arm across a Blackpool chap before hastily withdrawing it. The chap with orange shorts went down as if he’d been slung across the ring by Shirley Crabtree and the pathetic excuse for an official decided that this was a heinous-enough crime to send the Frenchman from the pitch for an early luxury jacuzzi and massage.

Game on for Blackpool. To be fair they did press, hit the post and then scored a goal from a corner from which O’Connor was given the freedom of Islington at the back post. They might have had an equaliser if their shooting and crossing was anywhere near standard. Cech was grateful to see the ball sail over his bar half a dozen times.

Petr’s passing out from the back hasn’t improved while he’s been in the sick bay. He nearly gifted Blackpool a second but the offside flag saved us.

Blackpool’s resurgence was ended when the ref evened things up after the Blackpool goalscorer committed GBH on Auba in the centre of the pitch. There’s a difference between taking a booking for the team and committing an offence which should get jail time. This was the latter.

Arsenal never looked like a team all night. Some seemed offended they’d been chosen to play for the second string, others were content to pass backwards rather than attempt to beat the bus.

The prize was yet another home tie, this time against our smelly neighbours. Hopefully we’ll get the winners of Boro v Burton in the semi final 2 legger. 🙂

Cech: not a lot to do – needs to work on his passing…6

Lichtsteiner: great goal, looked at home against League One opposition…7

Mustafi: effective in parts – left his man (when he had a choice of two) for their goal…6

Pleguezuelo: Doesn’t look a centre back but a competent debut…7

Jenkinson: You can almost see how much he enjoys playing in a red and white shirt – assist for the second…9

Ramsey: not willing to make his extra class count – played well within himself…6

Guendouzi: MOTM by a country mile until the ref intervened – only pipped by Jenko’s enthusiasm…8

Smith Rowe: don’t remember him taking anyone on – the goal will give him some confidence hopefully…6

Maitland-Niles: lost at the start of the game but showed some decent touches when dropping deeper – rusty…6

Mkhitaryan: why am I playing in the Caribou Cup? – another Ramsey-like performance…6

Welbeck: ran around quickly but lacked much quality on the ball…6

Torreira: gives 100% regardless of the opposition – others take note…7

Auba and Iwobi: came on to see the game out…6

This entry was posted on Thursday, November 1st, 2018 at 8:10 am and is filed under Uncategorized. You can follow any responses to this entry through the RSS 2.0 feed. Both comments and pings are currently closed.