Arsenal: We’ve Got Our Bottle Back?

On the eve of our Saturday tea time visit to Stamford Bridge, perhaps it would be enjoyable to remember a fine performance away at the bus stop in Fulham. Victories when they come at unexpected moments are often the most pleasurable. With our new manager and signings already showing hints of more steel and determination, could we start to believe The Arsenal have begun to rediscover our bottle. Cheers, Rocky.

How are you feeling this morning?

We have kind of forgotten what it’s like to enjoy a BIG win; a meaningful win; a surprise win against the odds.

Most of our surprises in the last six months have been nasty ones – the kind Mrs Gary Neville has every morning when she wakes up and sees who’s beside her. 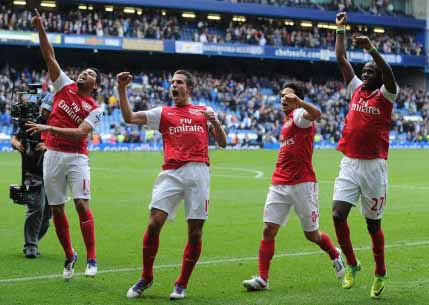 But Saturday was different. We went to one of the bookies’ favourites for the title and gave them a spanking in their own back yard. And just because it’s a Chav back yard full of old piss-stained mattresses and wrecked cars, that doesn’t make the win any less sweet.

Make no mistake, Chelsea were seen by many as the real dark horses (whoops, sorry JT, I meant pale horses) in the championship race. Even in defeat to QPR last week they earned plaudits for almost nicking a result with only nine men.

But in the second half of Saturday’s fine win we completely dominated them, winning the half 4-1, taking a stranglehold on midfield and defending well (we only conceded because the ref missed a blatant foul on Santos).

The first half was a different story, with both teams attacking like panthers and defending like pandas, but enough has been said about that in all the match reports.

The point is, we found ourselves in a game that, several times, could have gone away from us – at 2-1 and at 3-3 in particular. But we refused to allow it to do so. 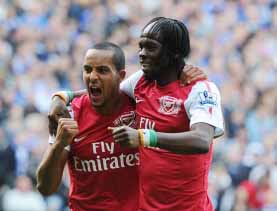 Having hauled ourselves level at 1-1, then gone in one down at half time thanks to another soft goal conceded from a set piece, heads could easily have dropped.

If this had been last year’s Arsenal team, with the homesick Spaniard and the fat French trouble-maker, I think that’s exactly what would have happened. Our heads would have gone down faster than Dani Alves on ice.

But this is a different group of players with a much better mix of vim and experience. It’s interesting that our best performers on the day (with the exception of Prince Robin) were the younger ones: Koscielny, Ramsey, Gervinho and Walcott.

But I have no doubt that they felt enabled to play their best game by the presence of older heads like Arteta, Mertesacker and Santos (as well as Rosicky when he came on), all of whom added an air of stability to the team. 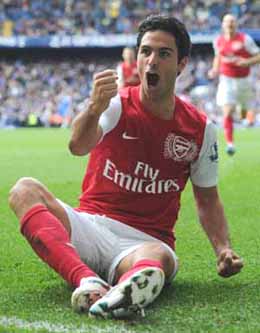 We now have players who do not panic when we’re leading with 10 minutes to go. Indeed, against a dangerous Chavski side we looked very solid in the final stages (the BFG making up for a poor first half by dominating the box in the closing minutes).

We were calm enough and confident enough to see the game out – and bold enough to take our chance to really kill it off when it arrived.

Someone has clearly been to Lost and Found and reclaimed something we mislaid about two years ago: our bottle.

No-one really knew where it had gone. Pat Rice went all up and down the Holloway Road stapling little notices to trees and lamp posts saying “Missing: Our Bottle: Answers to the name Vieira or Adams. Reward if found.”

There were no takers, but now it has turned up of its own accord, just when we needed it most after the most disastrous start to a season for 58 years.

There is still everything to play for this season. The Mancunian lottery winners may be streets ahead at the top of the table but there is a long way to go and anything can happen.

Next up for us in the league are West Brom (H), Norwich (A) and Fulham (H). With the players we have, and with the fact that we now have our bottle again after such a long time, everything is possible.

This entry was posted on Friday, August 17th, 2018 at 7:23 am and is filed under Uncategorized. You can follow any responses to this entry through the RSS 2.0 feed. You can leave a response, or trackback from your own site.

26 Responses to Arsenal: We’ve Got Our Bottle Back?