So, what did we learn today after witnessing Unai Emery’s first game in charge? Your guess is as good as mine but as I am writing this it is my guess that is going to be heard. Did we see evidence of a new much talked about high press? Err not really. Lacazzette was looking as fit as a butcher’s dog and was covering the final third with what seemed like a new found determination. The number nine is his but the Frenchman knows that he has to earn it every week because it is only a short hop across from the left wing for Aubameyang who, as we all know, is more than capable of playing that role. 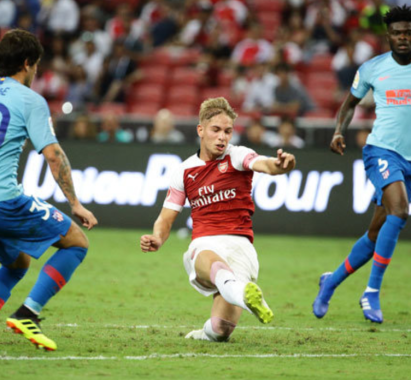 Ramsey strutted his stuff with all the air of a player who knows he can leave and be made welcome at any club in Europe. I have no doubt that the club are doing all they can to keep him but unless you have been living under a rock for the last five years everyone knows that there is nothing that a club can do anymore to force an in demand player to sign a new contract. My guess is he will do an Özil.

The one punt I would have as to what is new is that UE wants to put his marker down on who he wants to bring through the ranks and into the first team. Maitland-Niles was conspicuous by his absence in the starting line up. Why? M-N is a Wenger prodigy, Smith-Rowe is now clearly an Emery prodigy. See where I am going with this? The same applies to Guendouzi.

As for the defence it looks as though we are in for another heart stopping season. If Emery can whip that lot into shape then he will truly deserve all the credit that comes his way.

So I watched the game on Bein Sports 2 in Arabic and when it came to the end of the 90 minutes I turned off not realising that there were penalties – doh.

This entry was posted on Friday, July 27th, 2018 at 7:58 am and is filed under Uncategorized. You can follow any responses to this entry through the RSS 2.0 feed. You can leave a response, or trackback from your own site.