Groups A and B to a Finish

England blast Panama and Group H reveals itself as most intriguing with its diverse participants.

The first two groups complete today. Group A is done apart from who’s first and second.

Group B will probably still finish with the two favourites going through but you never know. 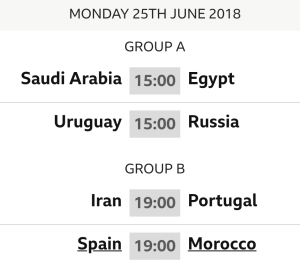 This entry was posted on Monday, June 25th, 2018 at 6:11 am and is filed under Uncategorized. You can follow any responses to this entry through the RSS 2.0 feed. You can leave a response, or trackback from your own site.

43 Responses to Groups A and B to a Finish