Who Do You Believe?

Mr Gazidis stated last week that the BoD had rigourously interviewed 8 candidates prior to employing Mr Emery. He said that all 8 wanted the job right up until the final decision was made and all had been through a full interview process.

Do we really believe this? 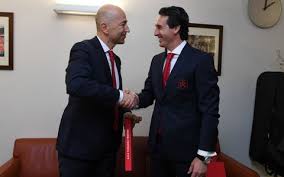 Who were the 8? The media say PV4 was approached at the last minute as a token gesture but that at no time was he interviewed for the post. Arteta we know about but the other 6/7?

Dyche? Howe? Seri? Could it have been Allerdyce or Moyes? The chap from Østerlund?

I cannot believe Guardiola or Zidane or Tuschel or any of the top managers who are currently employed by successful Big Clubs would want to take on AFC – despite it being a very attractive and well-paid job.

Conte? Perhaps. Poccettino? It would have been very funny but surely, if Ivan is telling the truth, we would have employed him as Poch would be an excellent choice for us.

Or was Ivan’s statement just a fop to the fans  as we took a last minute punt on Emery instead of Arteta?

We will never know

This entry was posted on Monday, May 28th, 2018 at 8:03 am and is filed under Uncategorized. You can follow any responses to this entry through the RSS 2.0 feed. You can leave a response, or trackback from your own site.

35 Responses to Who Do You Believe?