Alex Scott. A Thank You

This is the first of series of posts throughout the summer saying farewell to Arsenal stalwarts. We are entering a new era with the inevitable casualties as people retire or are moved on.

First in the series is Alex Scott. Who? You don’t know? Arsenal Captain, 140 caps for England, MBE – yes … MBE! The only other Arsenal player I can think of who has a gong is TA6 (Alan Ball got one but not whilst at AFC).

Alex started her career at AFC at the age of 8, had one season at Birmingham and then returned to AFC where she became a cornerstone of the best Women’s team of all-time, winning the Quadruple in 2006/7 including the UEFA Champions League Cup – the first British team to do so. 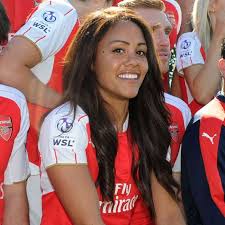 Alexandra Virina Scott has played at right full back and winger, she is a better Ashley Cole.

A spell in USA followed before returning for her third and final stint at AFC.

This is a proper AFC legend having won 5 League titles, 7 FA Cups, the Champions League plus numerous other Cups.

AT 33, Alex hangs up her boots. She has a burgeoning career in the media both as a journalist and TV pundit. Her smile and winning personality added to her knowledge and passion for the game make her a natural for television.

Alex, you are are an Arsenal great. Thank you so much for your efforts over past 25 years. There should be a statue.

This entry was posted on Wednesday, May 16th, 2018 at 9:18 am and is filed under Uncategorized. You can follow any responses to this entry through the RSS 2.0 feed. You can leave a response, or trackback from your own site.

30 Responses to Alex Scott. A Thank You