So Long and Thanks for all the Fish – Huddersfield Ratings

So after over 1200 games in charge, we finally reached the point where M. Arsene Wenger would be Arsenal FC boss for the last time. A goalfest in the sun would be perfect but some sneaky first away points of the year, acceptable.

Two planes flew banners over the beautiful arches of the Huddersfield stadium and the 22nd minute of appreciative applause was well observed.

The Beast wasn’t sharp enough to poke home a near post flick-on from a corner before the first quality piece of football in the match produced Aubameyang’s mini record-breaking goal. Laca and Mkhi exchanged passes before setting Rambo free on the left. His outside of the boot driven cross was superbly anticipated by Auba sliding in on his derriere at the far post.

The second half saw even more huffing and puffing from Huddersfield but little quality. Twice as many ‘attempts’ on goal than us but with one fewer on target tells its own story.

Two glorious one on ones for the boys in charcoal grey and pink were both squandered by Laca and Welbz respectively. Laca chose to lob a keeper who carried on standing up and Danny really needed to stop and change the angle rather than continue on his weaker left.

Huddersfield had two last attempts at spoiling the Wenger party, one shot flicking off the top of the crossbar and Ospina keeping out a last gasp header at the second attempt.

Mustafi – Some decent challenges and blocks … 7

Ramsey – Flitted in and out like a delicate butterfly  … 6

Xhaka – Great end of season, looking forward to him doing it all year  … 7

Iwobi – Scampered around trying to find a crack … 7

Mkhitaryan – on the beach already  … 6

Lacazette – Will a new manager have Alexandre down the middle with PEA on the left? – hmmm … 7

Monreal – presumably came on to bolster the defence? … 6 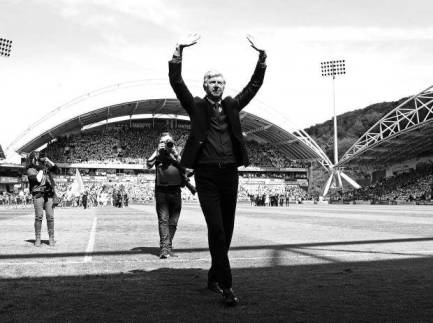 So Arsene got the send off he deserves with the team finally winning three points away from home at last.

Curiously enough, the dolphins had long known of the impending demolition of Earth and had made many attempts to alert mankind to the danger. But most of their communications were misinterpreted as amusing attempts to punch footballs, or whistle for titbits, so they eventually gave up and left the Earth by their own means – shortly before the Vogons arrived. The last ever dolphin message was misinterpreted as a surprisingly sophisticated attempt to do a double backwards somersault through a hoop, whilst whistling the ‘Star-Spangled Banner’. But, in fact, the message was this “So long and thanks for all the fish”.

This entry was posted on Monday, May 14th, 2018 at 8:47 am and is filed under Uncategorized. You can follow any responses to this entry through the RSS 2.0 feed. You can leave a response, or trackback from your own site.