Gennaro Gattuso was born in Corigliano Calabro a picturesque but relatively poor town in Calabria, Southern Italy. He’s married to a Scottish woman of Italian descent (an explosive combination if ever there was one) and his reputation of being a man with a short fuse has added fuel to the fire of their tempestuous relationship. 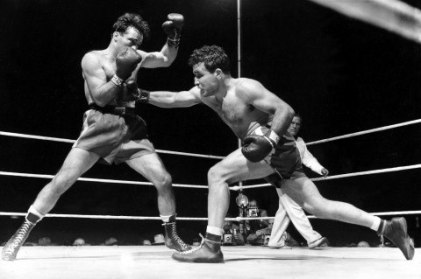 Beginning his career at Perugia, he was signed by Walter Smith at Glasgow Rangers when only 19 years old. He quickly became a cult hero on the banks of the Clyde with his ‘mad dog’ careering style – the Glaswegians were unused to Italians who didn’t cruise about in expensive suits. Paul Gascoigne at Rangers at the same time must have produced a rather volatile dressing room atmosphere.

Gattuso’s playing career really took off when he was signed by AC Milan in 1999. He enjoyed 12 productive years at Milan before an eyesight problem forced his early retirement in 2013. When playing colleague, Andrea Pirlo was dropped into a deep-lying  “trequartista”role, ‘Rino’ became the perfect foil for the cultured playmaker. Complimented by the close presence of Clarence Seedorf, with Inzaghi and Shevchenko up front and Rui Costa in behind, a formidable Milan emerged. Kaká, Rivaldo, Hernán Crespo, Christian Vieri all played in front of the twin engine midfield of Gattuso and Pirlo. Unsurprisingly, Milan won the Champions League twice in 2003 and 2007.

One of Gattuso’s most appealing moments from the point of view of an Arsenal supporter came in 2011 when he grabbed Joe Jordan of Tottnumb Hotspurs by the throat during a CL game. There was also a reported headbutt after the match.  Joe Jordan had played for AC Milan himself after his succesful time with Leeds and the red mancs in England.  Gattuso’s agent’s statement that Jordan called the player “a f****** Italian bastard” seems unlikely. Gattuso was reported to have said that the verbal exchanges were “in Scottish”. 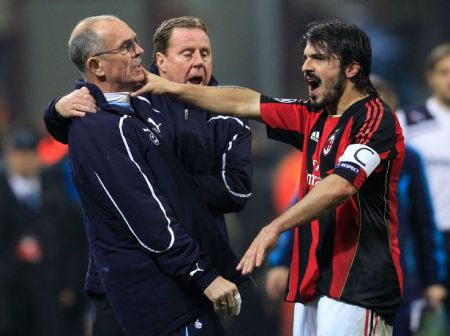 In January 2010, Gattuso opened a fish shop in his home town, presumably as some form of insurance for the end of  his playing career, but the lure of the game saw him immediately launch into various managerial exploits with differing degrees of success.

Stints at Sion (as player manager), Palermo, OFI Crete and Pisa, eventually saw him return to Milan in the summer of 2017, equipped with a full coaching licence, to manage the Milan Primavera Under 19s.

Vincenzo Montella’s sacking last November, catapulted Gattuso to the head chair at the club and although Milan are currently 7th in Serie A, their form is good with 6 wins and two draws out of their last 8 games. The Milan derby last Sunday was postponed due to the untimely death of Davide Astori, so they’re relatively rested, with their last game over a week ago (they scraped past Lazio in the Coppa Italia on penalties).

Apparently 67,000 tickets have been sold by Milan for Thursday’s home leg which goes to show that North London’s finest still prove to be an immense draw. One things for sure, Gattuso will lack nothing in motivating his team to ensure Arsenal receive a very warm reception indeed.

This entry was posted on Wednesday, March 7th, 2018 at 9:45 am and is filed under Uncategorized. You can follow any responses to this entry through the RSS 2.0 feed. You can leave a response, or trackback from your own site.