Whenever I look back on my 70 years of supporting Arsenal and the hundreds of players that I’ve watched one name always stands out in my memory – Number 6, Tony Adams who is rightfully known as Mr. Arsenal. He was born in Romford on October 10th 1966 and grew up in Dagenham. From 1971 to 1978 he was a pupil at Hunters Hall Primary School and from 1978 to 1983 at Eastbrook Comprehensive School.

He was still a 15 year old schoolboy when he signed for Arsenal in 1980 and one of his tasks was to clean the players’ boots after games. 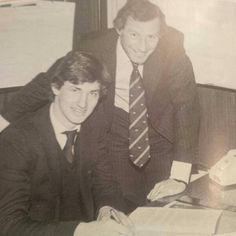 He made his first team debut just four weeks after his 17th birthday. Along with Lee Dixon, Nigel Winterburn and Steve Bould he was part of the “famous back four” that formed Arsenal’s formidable defence; he became Arsenal captain at the age of 21 and remained as club captain until his retirement – 14 years later. 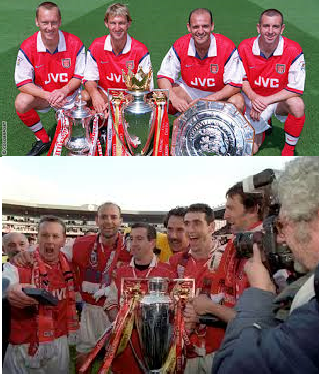 Adams’s strong discipline of the defence was considered a factor in Arsenal winning the League Cup in 1986–87.

For Arsenal fans, there has arguably been no other player in the Club’s history who has encapsulated the spirit and quality of the club more than Tony Adams, a colossus of a defender who is considered by many as one of the finest to have played for England and Arsenal.

Sir Alex Ferguson often attempted to sign him, and at his testimonial stated, “I would love to have had him in my side, and I don’t think it’s any secret that there were inquiries made at one time from Old Trafford.”

Pat Rice, Arsenal assistant manager, stated, “what a leader, what a player, what a man.”

His successes on the field were challenged by a decade long (1980-1990) battle with alcohol. On 6 May 1990 he crashed his Ford Sierra into a wall and his blood alcohol level was more than four times the legal limit. He was imprisoned for four months and freed after serving half of his sentence. He became one of the most high-profile recovering alcoholics in the UK and his battle with alcohol is detailed in his autobiography, Addicted, which was released to critical acclaim in May 1998.

He won the First Division championship twice; the first being after our famous Friday night victory over Liverpool at Anfield which secured the 1988–89 Championship. The second was in 1990–91, after losing only once all season – (W24, D13, L1, GF74, GA18).

In 1992–93 he gained the distinction of being the captain of the first English side to win the League Cup and FA Cup double. Then in 1993-94 he was captain when we won the European Cup Winners Cup.

Member in The Most Excellent Order of the British Empire (MBE)

A statue honouring Adams was unveiled at Emirates stadium on 9 December 2011.

This entry was posted on Thursday, October 26th, 2017 at 10:30 am and is filed under Uncategorized. You can follow any responses to this entry through the RSS 2.0 feed. You can leave a response, or trackback from your own site.